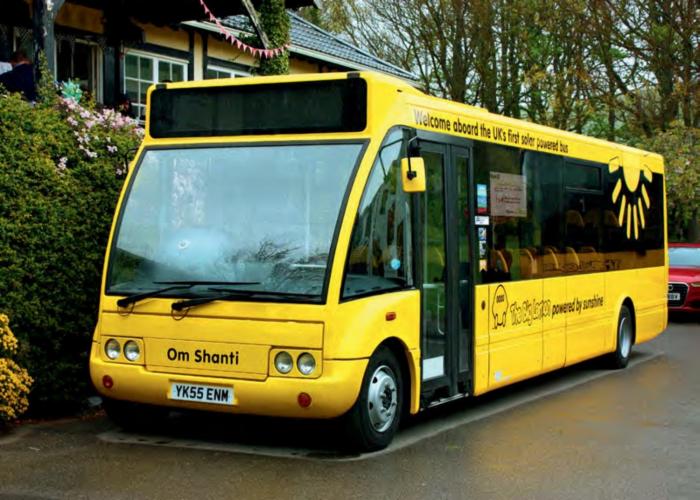 YK55 ENM, the first of the Optare Solos converted to electric power for The Big Lemon.

Brighton-based The Big Lemon claims to be the first UK operator to put into service what it is promoting as solar-powered buses. The buses in question are two Optare Solo midibuses converted to run on electric power. They will be operated on contracted service 52 between Old Steine in central Brighton and Woodingdean, on the east side of the city.

The launch of the first in April followed the official announcement (Buses last month) that former Liberal Democrat MP and bus minister for England, Norman Baker, had been appointed The Big Lemon’s managing director. Tom Druitt, the founder and driving force behind the 10-year-old company’s development, is taking a step back to push for expansion of his green-energy transport concept across the country.

The 12-year-old Solos were bought from dealer stock as conventional diesel-powered buses and are being converted to electric-only power by Sheffield-based electric traction specialist Magtec. They are also being refurbished internally by Thornton Brothers of Ashington, Northumberland, emphasising the yellow and black Big Lemon identity.

The Big Lemon has installed two threephase charging points at its shared depot in Kemptown, near Brighton Marina. The buses will be recharged here either between daytime shifts or overnight. Recharging time is expected to be between 4hr 30min and 6hr, depending on mileage run during the previous shift.

Solar energy comes into play because the company has installed 20 solar panels on its workshop roof. When the buses are charged during daylight hours they will draw current from these panels. For the rest of the day, the solar power will be used to meet the depot’s electrical requirements, and the surplus electricity will be fed into the national grid under the government’s Feed-in Tariff (FiT) scheme. 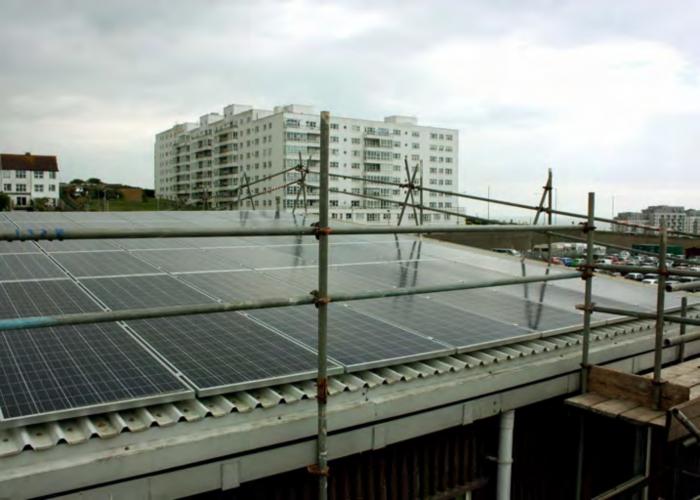 Solar panels on the roof provide some of the electricity to charge the buses.

When the buses are charged overnight, they will draw current from the mains in the conventional way. However, Druitt says the solar panels will produce more power than is needed to keep the two buses going throughout the day (a maximum of 21kW), so the company will be a net contributor to the grid. This means it can claim that, conceptually, the buses are entirely solar-powered.

The battery packs fitted by Magtec are said to be able to power the buses for up to 130miles on a single charge – more than enough for the eight round trips of around 12miles on route 52. However, Druitt is taking a cautious approach to their range. When we talked to him, trials were just starting. ‘We have yet to determine if these buses will run a whole shift on a single charge,’ he says, ‘so we might have to be a bit creative.’

His solution is to run one bus in the mornings, then pull it in for interim recharging while the other bus takes over – an approach that will be possible because the 52 is a one-bus route. ‘We may be favourably surprised by the battery capacity,’ he says, ‘but the terrain is hilly, so we don’t want to make assumptions at this stage.’

We may be favourably surprised by the battery capacity, but the terrain is hilly, so we won’t make assumptions

The company has bought three Solos. The initial vehicle, an ex-First South Yorkshire 26-seater, is ready for service and has been named Om Shanti, an eastern invocation of peace and goodwill. The second is undergoing conversion, and there are plans to convert the third to electric power once the necessary funding is in place. The Big Lemon also plans to double the number of solar panels on the workshop roof. ‘Then we will have more than enough capacity to run three buses on solar power,’ Druitt says.

He puts the cost of buying and converting the two initial Solos at £140,000 each, while the cost of installing the solar panels was £25,000.

In 2014, Magtec carried out Britain’s first conversion of a double-decker — a Dennis Trident — to all-electric drive for Transdev’s York City Sightseeing operation. It also supplies Optare with driveline components for use as original equipment on its electric bus range. 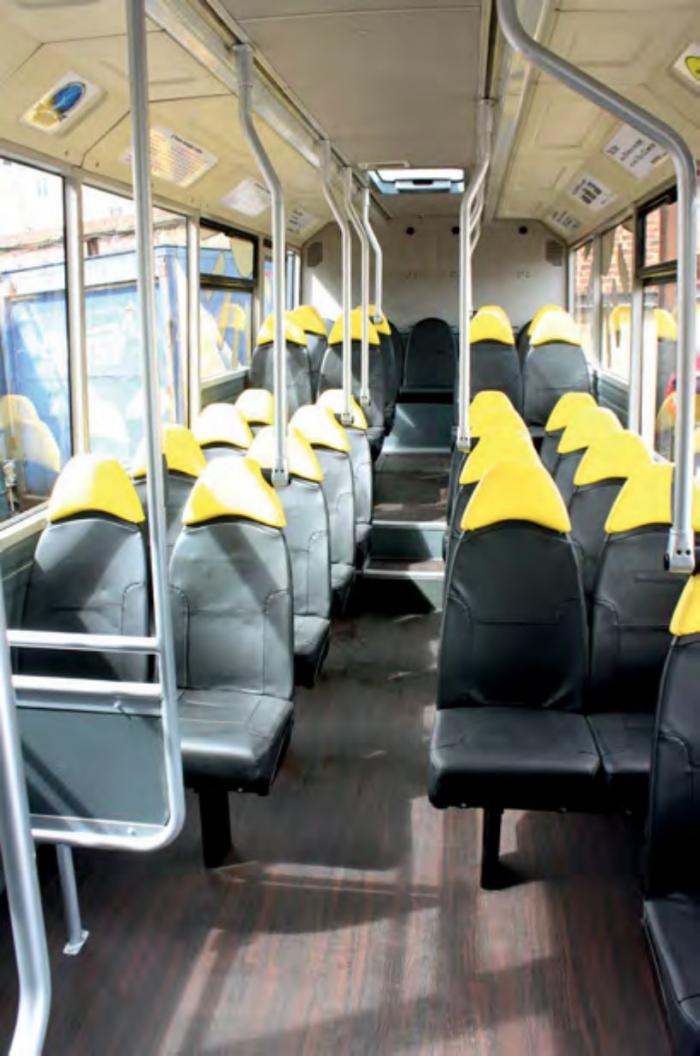 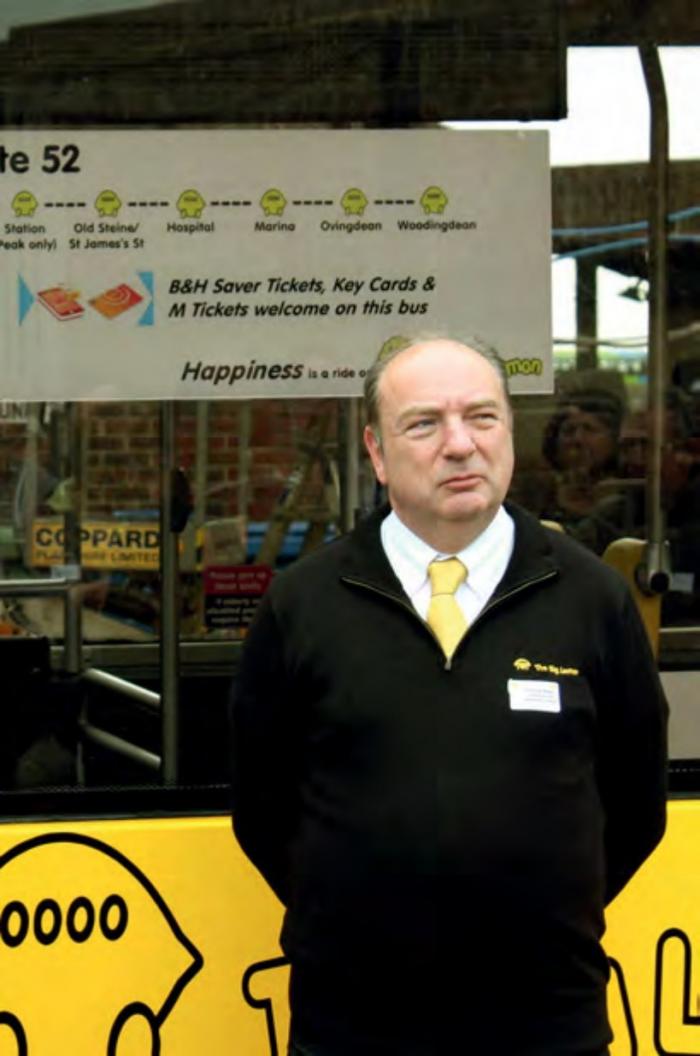 The project for The Big Lemon has been carried out independently of Optare, but Druitt says the bus manufacturer has kept a watching brief on progress. ‘We always have in the back of our minds the possibility of buying new electric buses from them at some point in the future.’

The introduction of electric power marks a new phase of the company’s development, and has been accompanied by a major publicity drive over the past two years to help fund the scheme. It has used a range of crowd-funding measures to pay for the solar power programme and has so far attracted investment of just over £13,000 from more than 160 private individuals in the Brighton area, plus seven of what it calls ‘major sponsors’ and three key partners – Sussex Backup, Infinity Foods and Buddies Café.

The solar panel project has also benefited from the involvement of two key organisations – Brighton Energy Cooperative and Marks& Spencer’s M&S Energy Community Energy Fund. This organisation was founded in 2015 to support renewable energy projects and last autumn chose Big Lemon as the winner of its south regional prize, contributing £12,500 to the project – half the target amount.

Druitt says the company’s ambitions for solar power do not stop at three buses. ‘If all goes according to plan, we hope to add more electric buses in future,’ he says. There is not enough roof space at the current depot for solar panels to power more than three buses, but there is a provisional plan to draw additional solar power from an existing facility run by the Brighton Energy Cooperative at Shoreham, west of Brighton. ‘We might station additional electric buses there.’

He says he has also suggested to Go-Ahead subsidiary Brighton& Hove Bus and Coach, the dominant operator in the area, that it might consider installing solar panels on the roof of its depot. ‘The idea got quite a favourable response,’ he says.

Norman Baker spoke at the launch of his ambition to reinforce the popular view of public transport as ‘an essential component of a wellfunctioning society’. He says Big Lemon had proved over its 10-year life that it had got the basics right with its good drivers and clean buses. ‘The solar bus project takes that concept a step beyond.’

Baker’s target as managing director is to build up the business by taking on new buses and coaches and opening up new routes. Druitt expanded on this, saying: ‘We already have a few irons in the fire, which could lead to the launch of new routes in September.’

Currently it runs five bus services in Brighton& Hove, though they are modest by big-company standards. In addition to route 52, which is run on contract to Brighton& Hove City Council, it operates two park-&- ride services for Legal& General and services to and from two colleges.

Besides the Solos, its 12 vehicles include Volvo and Scania coaches with Van Hool, Jonckheere and Plaxton bodywork, and Mercedes-Benz midibuses.