NTL — manufacturer of the Translohr rubber-tyred tram — and French train builder Alstom have unveiled the Aptis, a double-steered electric bus due to begin trials in Paris later this year.

Although built to standard bus dimensions — 12m long, 2.55m wide and 3.1m high — it is designed to be far more manoeuvrable. The wheels are on all four corners and all are steered, so it occupies 25% less surface area in curves, thus minimising the space needed to park. It will have a choice of two or three double doors.

NTL is manufacturing prototypes in Duppigheim, Alsace, with electrical components and other support coming from five Alstom sites in France.

State-owned RATP — which aims to have all 4,600 of its buses powered by electricity or biogas by 2025 — will trial one Aptis for six months on routes 21 (Gare Saint Lazare-Porte de Gentilly) and 147 (Eglise de Pantin-Sevran, Avenue Ronsard). The bus will then spend 12 months with Keolis on suburban service 23 linking Vélizy and the Palace of Versailles. 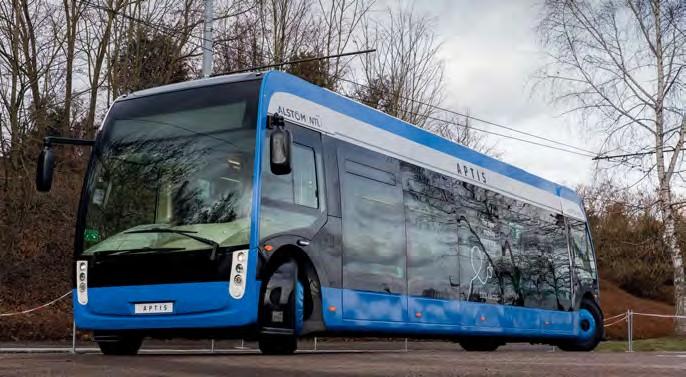