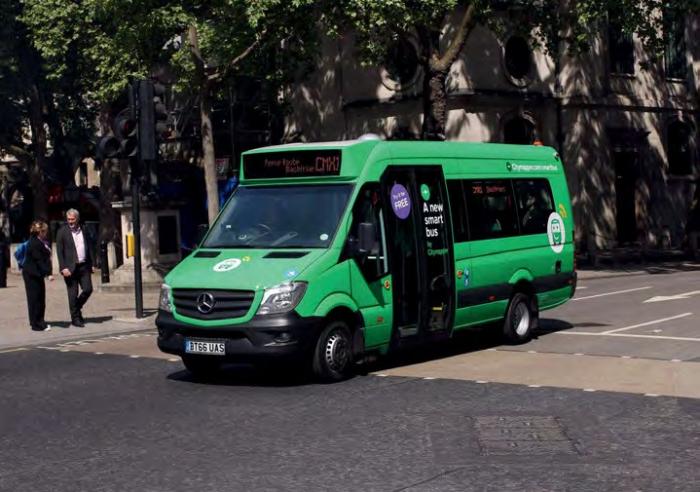 BT66 UAS, one of the three Mercedes-Benz Sprinters operated on pop-up route CMX1, in the Strand on 10 May.
RICHARD GODFREY

Transport app developer Citymapper ran an experimental pop-up minibus service in central London on 9 and 10 May with a promise to employ technology to rethink how buses operate.

The buses, which were operated under Transit Systems-owned Impact Coaches’ operator licence, ran roughly every 10min although this was adjusted, using Citymapper’s data, in response to demand and traffic conditions.

As the service did not have a London Service Permit from Transport for London, it was operated free. Citymapper’s aim is to complement the existing TfL network by filling in the gaps, with full seven-days-aweek services. Ultimately it also plans to roll it out to other cities.

An LSP application has also been made for a service linking Highbury & Islington station and Aldgate, which would run every 12min on Friday and Saturday nights from 21.00 to 05.30. The proposed route would provide a night service to an area with a large number of late night entertainment venues, but which is not well served by existing night buses.

It hopes to start operating this service on 14 July and Impact Coaches has already acquired some Alexander Dennis Enviro200s, dating from 2011, from Abellio London. The first of these has been repainted green in anticipation of securing approval.