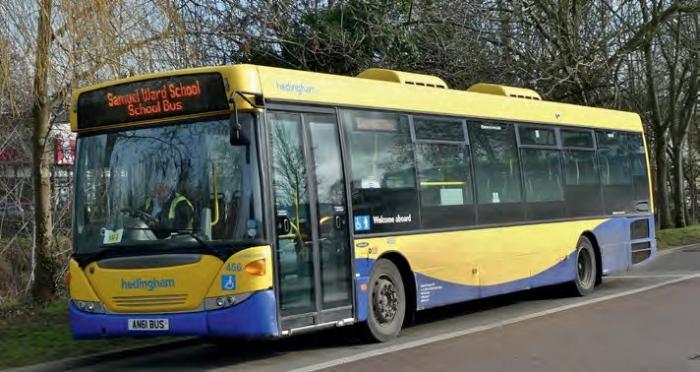 Scania OmniLink 456 (AN61 BUS), a Scania OmniLink, operating in Haverhill in February still in Anglianbus livery, but with Hedingham fleetnames and Konectbus legal lettering.
DAVID SLATER

Go-Ahead owned Konectbus will withdraw its last routes in Suffolk during March and April.

They were inherited with the takeover of Anglianbus in 2012, but Go-Ahead now says: ‘We have sustained losses of several million pounds in our Beccles-based operation in the past few years.’ Services 87/88 between Southwold, Halesworth, Bungay and Norwich will be withdrawn in two stages, with the commercial element between Norwich and Bungay disappearing after 1 March.

Evening and Sunday buses, plus the Bungay- Southwold section, are contracted operations that will continue until 31 March.

In the interim, Konectbus is reducing fares between Southwold and Bungay so that the cost of travelling to Norwich will be no dearer, even though passengers will have to pay again on First’s X41 from Bungay to Norwich, a competing service introduced in May 2017. Konectbus then ran half-hourly against First’s hourly frequency, but the position has since been reversed.

Passengers travelling between Southwold and Norwich also have the option of using BorderBus service 146, which takes a shorter route with a 90min journey time, 30min faster than Konectbus and twice as frequent.

The Beccles outstation, once Anglianbus’s main base, will also close, Go-Ahead saying that there has been ‘poor reliability which we have been unable to address at a small operation that is remote from our main business’.

■ Operator licences for Chambers and Hedingham were given up in January, with Go-Ahead’s entire East Anglia operation now on the Konectbus licence.