In Fleet News this month

You are viewing premium content from a subscription product

L Lowbridge double-decker with side sunken gangway upstairs. All other double-deckers are H (highbridge) regardless of overall height.

For double-deckers, this is shown with the upper deck capacity first (e.g. 43/30, indicating 43 ‘over’ 30. Where the split is not known, a total figure (e.g. 73) is shown in the same style as for single-deckers. The total seating capacity shown includes all fixed and tip-up seats. The vehicles themselves may show other permutations of seats, standing spaces and wheelchair capacity.

Registration numbers first issued from 1 September 2001 show a two-letter area identification code (e.g. BU for Birmingham, CU for Swansea, SX for Inverness), followed by a two-digit code indicating the period of first registration (e.g. 51 for September 2001 to February 2002, 02 for March to August 2002, 52 for September 2002 to February 2003, 03 for March to August 2003 and so on. These are followed by a three-letter identification of the vehicle itself. In ‘Fleet News’, a batch of vehicles with consecutively issued registrations will be shown in the following fashion: LS34-46 (GG51 PYS/T/ V-Z, PZB-F/H). The letters I and Q are not used in these three-letter combinations.

Where a vehicle has been re-registered, its previous registration number(s) (where known) follow in italic type (e.g. RM48 (LDS 199A, VLT 48), with the most recent given first.

WHERE TO SEND REPORTS

English and Welsh reports (no photographs) should be sent to: John G. Lidstone, 76 Thames Drive, Leigh-on-Sea, Essex, SS9 2XD, marking your envelope ‘Fleet News’ (mail sent to the previous address in Shoeburyness will no longer be forwarded. Mail not marked ‘Fleet News’ may miss our publication deadline) E-mail text messages (no attachments or photographs, please) to: busesfleetnews@gmail.com Twitter @John_Lidstone

2 Way Transport, Scunthorpe Ex-Lothian Volvo Olympian/Alexander RH-type M215 VSX, which was earmarked for export to the United States last year, has gone to Scotland instead, for preservation.

Arriva North East AA Further to previous reports, there are three Volvo B7TL/Alexander Dennis ALX400 is blue and white diagonal striped livery for Teesside-Yorkshire coast services X93/X94. These are 7424-6 (LJ55 BPZ, BRV/X), the livery being applied by vinyl wrap rather than paint. 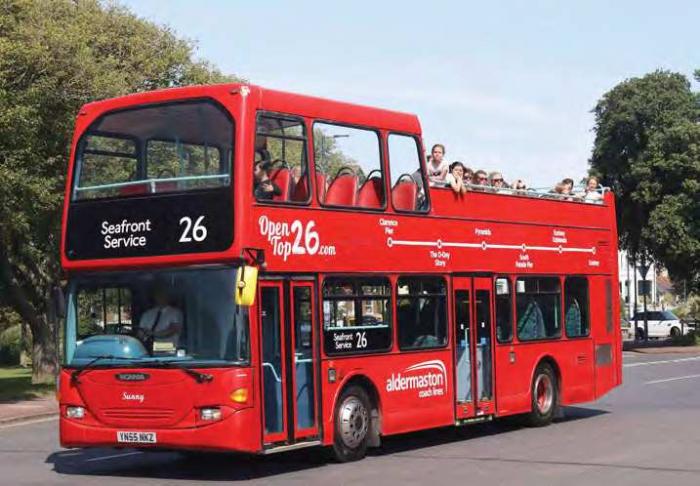 VDL SB200/Wright Commander 1403 (NK53 HHZ) has been repainted into driver training livery and was at Ashington by mid- July; 1401/2 (NK53 HHX/Y) have remained in service pending driver trainer conversion, at Blyth and Ashington respectively.

Baldry’s Coaches, Holme on Spalding Moor, North Yorkshire Bedford OB/Duple Vista C29F SJ 1340, new in 1951, acquired here in 2017 and since restored as a heritage vehicle for weddings and other special hires, is back on the road for the first time in nearly 30 years. It spent its operational life on the Isle of Arran, new to Gordon, Lamlash and ultimately with Arran Transport, which took it out of service in 1971 but owned it for more than 20 years before selling it for preservation. 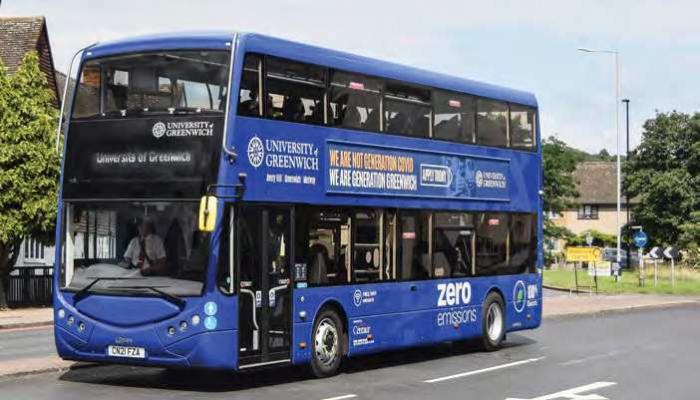 CN21 FZA, photographed in Eltham, is the first of two battery-electric Optare Metrodeckers that Centaur Travel is operating on the University of Greenwich on its inter-campus shuttle.
KRIS LAKE

Ex-Bus Vannin Mercedes-Benz Citaro 152 (KMN 223U) has been re-registered CX12 FNH and painted with an orange front and red rear.

Scania N230UD/East Lancs Olympus 471 (CN57 FGC) is one of two given Island Flyer branding for a summer holiday service linking Llanrumney and St Mellons with Cardiff Bay and Barry Island.

Centaur, Crayford, Kent CN21 FZA is the first of two battery-electric single-door Optare Metrodecker M1050EVs in blue with University of Greenwich branding for the free service connecting the campuses at Greenwich and Avery Hill.

Confidence, Leicester ECW-bodied Leyland Olympian 55 (C71 CHM), one of the last working examples of 263 built for London Buses, was sold to a dealer in June. 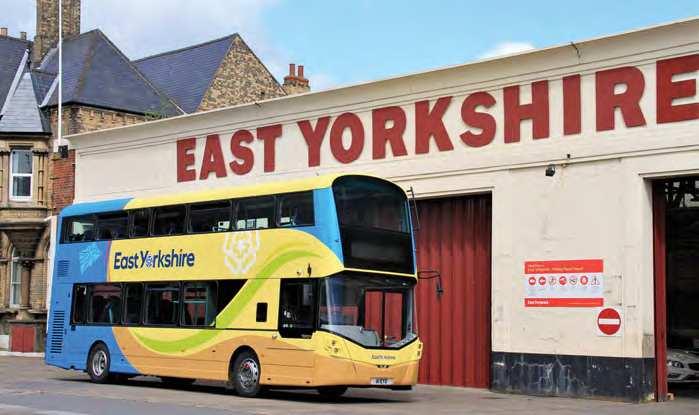 Ensignbus, Purfleet As reported on p12 last month, the air-conditioned Wright StreetDeck dual-door demonstrator loaned to Kowloon Motor Bus as W6S1 (WJ 1984) and in full KMB livery, has been acquired for conversion into a private hire vehicle.

Adding great interest to Southend seafront service 68 in August was the loan of preserved Eastern National open-top Leyland Titan PD1 1112 (LEV 917). This was one of two new in 1946 to City Coach Company, Brentwood (this was numbered LD1) which were the company’s first double-deckers. Westcliff-on-Sea Motor Services acquired the City business in February 1952 and was itself absorbed by Eastern National in January 1955. The two highbridge PD1s were converted to open-top in 1958 and 1112 (later renumbered 2102) was withdrawn in 1965. Its Leyland-designed body was one of 50 built by Alexander in a subcontracting arrangement.

Similar YX18 KVS went off lease in May, KX58 GTF and KX09 CHZ have passed to Select Bus Services, Penkridge and Optare Solo YJ15 ARF has gone to TLC, Bradford.

The future of Wright StreetLite Max 63332 (SK65 PXO) is in doubt after it suffered severe fire damage in late July.

Volvo B7RLE/Wright Eclipse Urban 66762 (YJ05 VGD) has been converted into a driver trainer in appropriate livery for this role.

Correcting July Fleet News, the route taken over from RATP London was not the 465, but the 463 (Coulsdon South-Pollards Hill).

Golden Tours, Alperton Covered-top Dennis Trident/Alexander ALX400 154 (V154 MEV) has been refitted as The English Tea Bus in York, while Alexander Dennis Enviro400 302 (LK07 AZA) performs the same role in London. Both are in a pink and white vertically striped livery and have been reconfigured with seats grouped around tables.

Go North West GA Volvo B7RLE/Wright Eclipse Urban 69179, 69203 (MX06 YXL, VPC) are further examples repainted white with Go North West diagonal stripes and a grey band above the side windows from behind the front axle with the wording “I’m being replaced soon”.

Mercedes-Benz Citaro 84 (WJ55 HLN) has become a training vehicle, replacing similar 80 (WJ55 HLG), which has gone into reserve with a gearbox failure.

The Harrogate Bus Company TD Battery-electric Mercedes-Benz Citaro E demonstrator MB21 BUS was on loan in August. Volvo B5TL/Wright Gemini 3 3620 (BL65 YYT) has been named Gareth Southgate in honour of the England football team manager, who lives in the area. 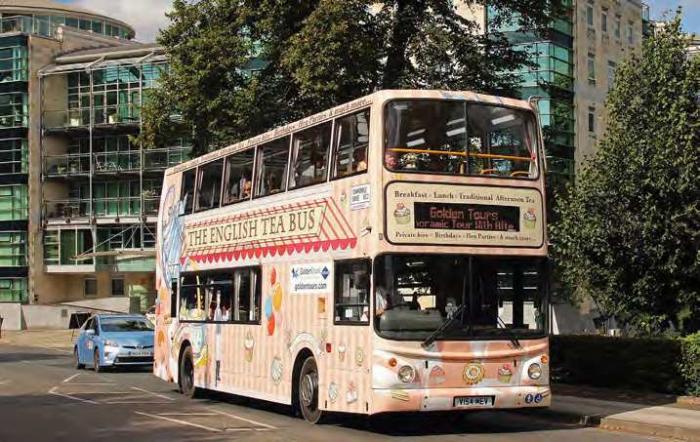 Alexander Dennis Enviro200 YX18 KVS has been on loan.

Hulleys, Baslow In a nod to the erstwhile Express Motors of Hulland Ward, Optare Solo 9 (MX09 AOF) and Alexander Dennis Enviro200 17 (MX11 CZM) have received a two-tone blue and cream livery with branding for services 110/111 (Matlock- Ashbourne). These were also the last two buses to carry the old block capital version of the fleetname.

K&P Coaches, Gaerwen B42F-seated Optare Tempo X1260 YA13 AAF has joined this fleet from Llew Jones, Llanrwst. It carries the new TrawsCymru livery and is for this operator’s half-share of new service T10 (Bangor-Corwen).

Lucketts Group, Fareham NX C49Ft-seated Irizar i6 integrals YT19 KUV/W have been transferred from The Kings Ferry, with KUV numbered 4912049.

Metroline DG A prototype battery-electric Volvo double-decker, with dual-door MCV body of a revised design, has been seen on delivery in London red with Metroline fleetnames.

Optare Solo electric demonstrator OSE2750 (OP02 ARE) was not used in service at Potters Bar and has returned to Optare. It was covering for the long-awaited electric Metrocity now expected in September. 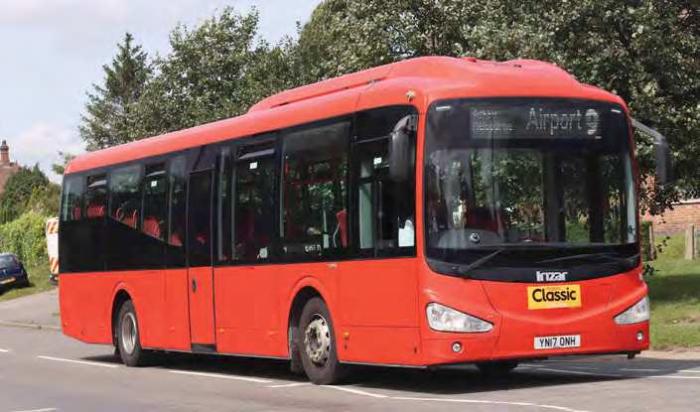 Midland Classic has doubled its fleet of rare Irizar i3-bodied Scania K250UBs by acquiring the six that Reading Buses operated on the Vodafone staff contract in Newbury. Among those placed in service still in Vodafone red is 16 (YN17 ONH).
RICHARD GODFREY

Alperton garage was due to close on September 10, with an open day planned for September 11.

Midland Classic, Burton-upon-Trent The heading for this entry was lost last month within the Metroline section, so is repeated and expanded here for clarity.

Scania K250UB/Irizar i3 B41F acquired from Reading Buses are 14-9 (YN17 ONF-H/J-L), of which 16 and one other entered service with Midland Classic fleetnames applied to the allover red they wore for the Vodafone contract in Newbury. Similar short wheelbase K230UBs YN64 FWU-Z (Fleet News, April) are numbered 23-8 respectively, with 24/6 the first into service. Other than two demonstrators, these 12 are the only Irizar i3 buses sold in the UK; four others were sold in the Republic of Ireland.

Newbury & District RB A National Express contract has been won to operate one round trip daily on services 210 (Heathrow-Oxford-Birmingham) and 507 (London Victoria-Cardiff-Swansea) from July 16, with driver changeovers at Chieveley services.

Newport Bus Dennis Trident/Alexander ALX400 431 (KV02 USH) has been reinstated after three years out of service.

Dennis Trident/Plaxton President 423 (LR02 BAO) and un-numbered TransBus Trident/ President PN03 UMK, which was acquired as a spares donor, have also been scrapped.

Optare Solo SR 1810 (KX14 FJF) is the first vehicle equipped with USB charging and painted in a pink and purple livery for Sheffield route 6.

The exact fare system, introduced nearly 50 years ago, was discontinued from July 21, a move justified by the increasing use of contactless payments and pre-paid tickets.

Optare Metrocity OM20239 (YJ14 BFY), with a different engine from the rest of the batch which transferred to Go-Ahead London, has been withdrawn.

The remains of accident-damaged Alexander Dennis Enviro400H ADH45038 (YX62 FMV), written off in 2018, were listed in an auction in July.

Alexander Dennis Enviro400 City 795 (SN66 WLK), a former demonstrator acquired with the Courtney business, has been painted into Green Line livery. Similar 758 (YX64 VRU), in generic livery with Green Line logos, has been released for other work.

Red Rose, Blackburn Leyland Leopard PSU3A/4R/Plaxton Supreme IV C53F SNC 366X has been acquired from Mayne, Warrington for preservation. It was new in 1970 as Midland Red 6236 (WHA 236H) with a Panorama body and received the Supreme IV body in 1980. 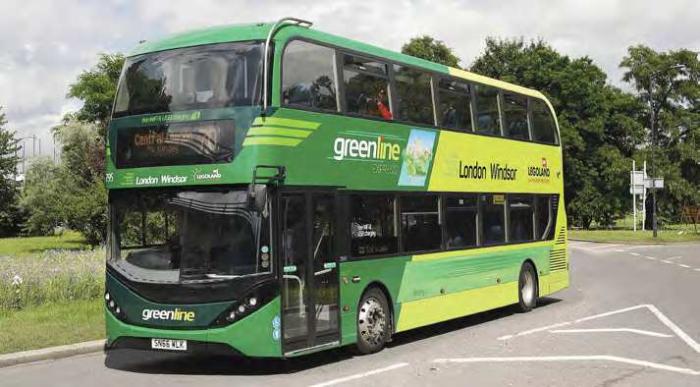 Wright StreetDecks 35272/5 (SL67 VWY, VXC) were on loan from First West Yorkshire from June to September. 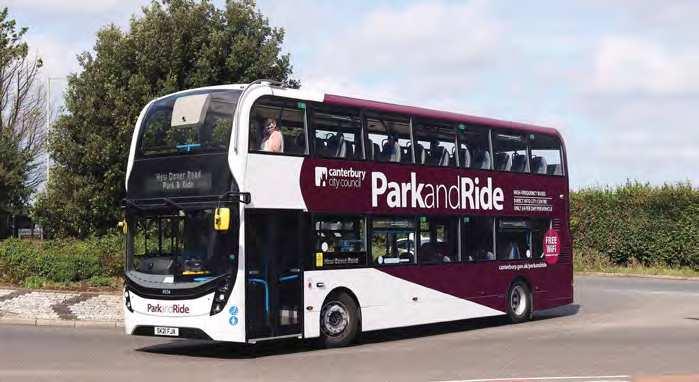 Volvo B8RLE/MCV EvoRa 21365 (BU69 XXC) has been lent to Stagecoach North Scotland for driver familiarisation in Orkney pending introduction of the type there.

Stagecoach London ST Wright New Routemasters LT461-3 (LTZ 1461-3) were due to move to RATP London as part of its route 111 allocation at the end of July.

Scania N230UD/Alexander Dennis Enviro400 15966 (YN14 PKZ) has been transferred from Stagecoach Oxford in exchange for similar 15767 (VX61 FJZ); 15966 has seatbelts and a tachograph and is required for a contract at Bristol. This is the first vehicle exchange between the fleets since their management was merged. 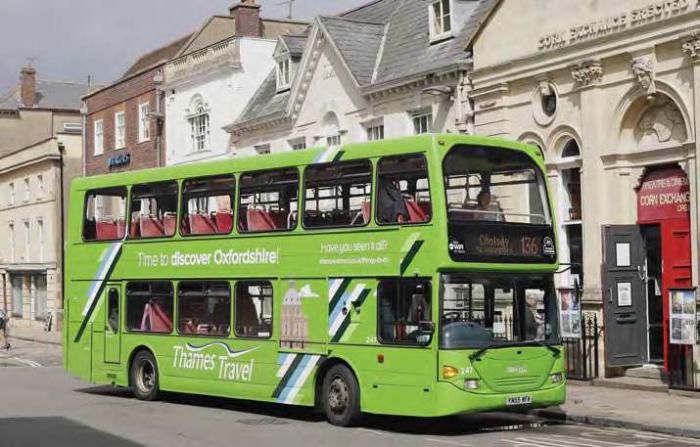 A new Thames Travel livery with branding to promote leisure journeys on 247 (YN55 NFA), an East Lancs-bodied Scania OmniDekka transferred from Brighton & Hove and photographed at the Corn Exchange in Wallingford.
MARK LYONS

Tootbus London RA Reports for The Original London Sightseeing Tour will now appear under this heading.

The Travellers’ Choice, Carnforth Four new Jonckheere-bodied Volvo B11Rs ordered for spring delivery last year but not delivered because of the pandemic, have gone instead to Ridleys, Warwick.

Further to the March Fleet News, Volvo B11R/ Plaxton Elite SJ15 HBR (HSK 649) was only on loan to the Hunter, Loanhead fleet and has returned here.

The caption of the photograph of NuTrack NuVibe SN16 DHC should have read Kirkby Lonsdale and not Kirkby Stephen. The Fleet News report gave the correct name.

Similar Futura TYR 17R has been reconfigured to C55FLTt for PSVAR compliance. 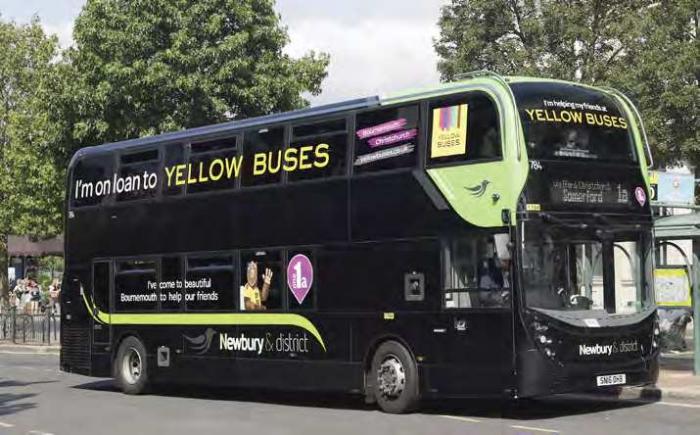 Yellow Buses has hired six Alexander Dennis Enviro400 MMCs from Newbury & District to boost capacity on service 1a (Bournemouth- Christchurch). They include 784 (SN16 OHB), numbered 1784 for its stay on the south coast.
MARK LYONS

Particular thanks are due, this month, to the following for your most welcome contributions to Fleet News by letter and by e-mail: