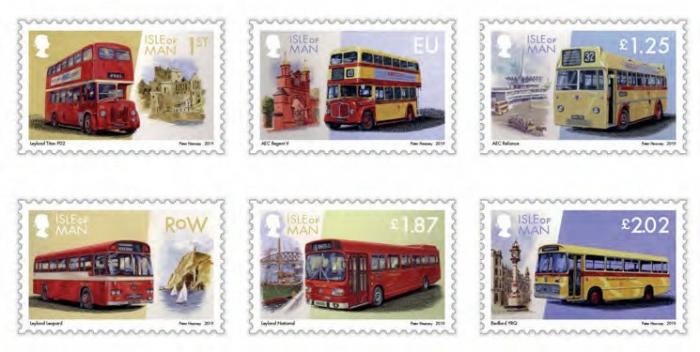 Isle of Man Post Office has released the third of its series of All Aboard Please! bus stamps with a collection of six depicting vehicles from the 1950s to the 1970s.

Local artist Peter Hearsey has been commissioned to produce the images, while historian and author Richard Davis provides expert commentary. The issue was released on 29 January, augmenting those issued in 1999 and 2015. They feature Manx buses from both the Douglas Corporation and Isle of Man Road Services fleets, which merged to become Isle of Man National Transport in October 1976.

Hearsey is a renowned automotive history artist who studied at Kingston-Upon- Hull College of Art from 1960-64. After working in London for many years within advertising, visualisation and illustration, he moved to live on the Isle of Man in 1977.

The artworks used in the issue depict buses next to historic landmarks and locations.

The Leyland Titan PD2, depicted on the first class value stamp, was the first double-decker with a concealed radiator to enter the Road Services fleet in 1956.

The other three show a manual gearbox Leyland Leopard (RoW), a Road Services Leyland National 1974 (£1.87) and a 1975 Douglas Corporation Bedford YRQ (£2.02), the municipal’s last vehicle before the amalgamation.