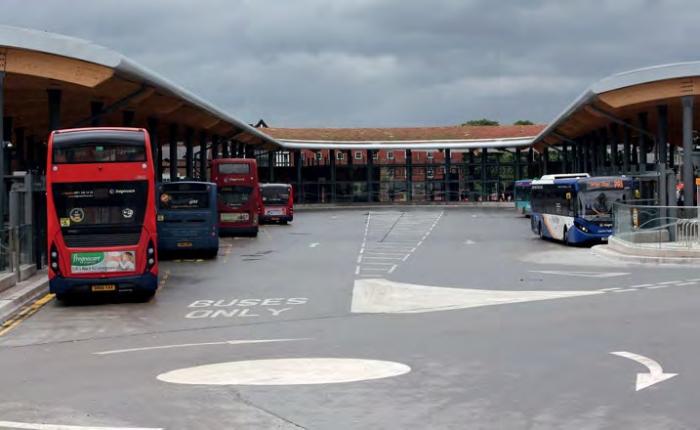 Five Stagecoach and one Arriva vehicle in the horseshoe-shaped Interchange.
RUSSELL YOUNG

After a six-month delay, Chester Bus Interchange opened for park-&-ride services on 30 May and for most other services on 5 June. Arriva services to Wrexham, Mold, Holywell for Rhyl and Connah’s Quay start from the railway station and do not call at the interchange.

Cheshire West & Chester Council closed the previous Bus Exchange behind Chester Town Hall to make way for new retail and leisure facilities to compete with cities in the region, as well as such popular out-of-town facilities as Cheshire Oaks.

Work on the new site began in September 2015 with a planned completion date of 12 December. Among the factors causing the delay was the need to redesign the layout to provide better access for buses and coaches. 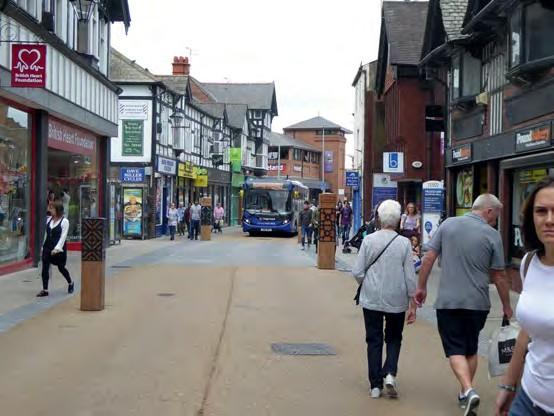 It caters for an average of 90 departures an hour and follows the shape of a horseshoe, with nine stands on the inside and four along one side in Gorse Stacks. The roof has a pregrown mat of mature sedum plants to lessen the visual impact. The roof can also help improve energy efficiency of the building by reducing heating and cooling costs, improves air quality by absorbing carbon dioxide and filters dust and pollution. It also reduces storm water run-off and lessen the load on the surface water drainage system.

Services operated by Arriva, Arrowebrook, Avon Buses, Aintree Coachline, D. J. Jones, National Express, Stagecoach and Townlynx use the 24hr facility, which has staff on duty between 06.00 and 23.30 on Mondays to Saturdays and until 20.30 on Sundays. There is a customer service desk and an information point displaying bus, rail and park-&-ride service information in the main entrance. At the time of opening, tenants were still being sought to run a coffee shop and newsagent.

To lessen the inconvenience caused by closure of the Bus Exchange, free Shopper Hopper service 200 has been introduced — initially for one year’s trial — linking the interchange with the Town Hall. Stagecoach operates it every 15min between 08.00 and 18.00, using a specially liveried Optare Solo.

As part of the redevelopment, Frodsham Street has been turned into what the council describes as an ‘attractive new gateway’ to the city centre. The road has been redesigned as a shared space for pedestrians and vehicles, but with only buses, taxis and authorised vehicles allowed to use the road between 10.30 and 16.30. Although one-way for motor vehicles, it is two-way for cyclists.

It opened before buses started using the road again and pedestrians got used to having relatively free access. Besides having to look out for pedestrians, bus drivers also have to take account of the road being designed as a streetscape with swept paths, and have strategically placed seating and wooden bollards to negotiate. 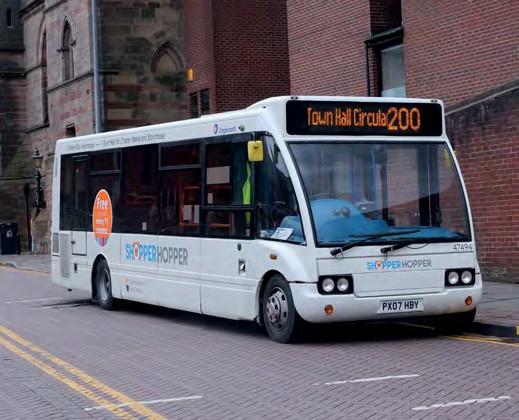