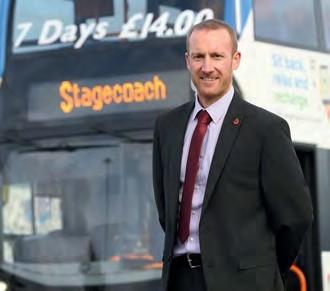 Alex Crane is the new operations director at Stagecoach Merseyside & South Lancashire. He joined Stagecoach in 1998 as a trainee driver, progressing through the group’s staff development scheme to take a managerial role at Preston. He later held operations management roles in Aberdeen, Wigan and at the Merseyside & South Lancashire company’s Gillmoss depot in Liverpool.

Nadean McNaught has joined Transdev’s Lancashire and Yorkshire business as finance director. After graduating from Newcastle Business School, she began a finance career with Nike in 1996, joined engineering consultancy Jacobs in London in 2002, was with the Aviva insurance business from 2003, before moving to Leeds in 2009 with electronic components distributor Premier Farnell and then to York with supermarkets group Costcutter.