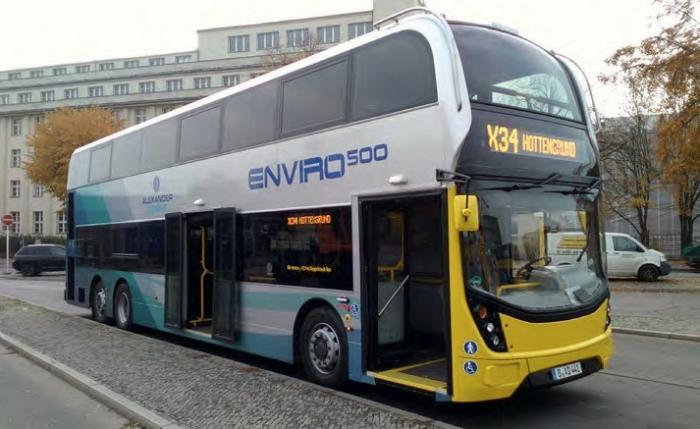 The Alexander Dennis Enviro500 on trial with BVG in 2015.
LAMBERT GLATZEL

Alexander Dennis is the favourite to supply 414 new double-deckers to Berlin transport undertaking BVG, according to local media reports. The city has also decided against buying electric buses from China.

The Berliner Zeitung newspaper says BVG has been swayed over by the flexibility of the British maker, which can supply double-deckers with three or two doors and with variable staircase arrangements. The paper quoted a reliable source at the undertaking and the Tagesspiegel daily carried a similar report.

Volkswagen-owned MAN is seen as the only other serious contender to produce replacements for the DL class of threeaxle double-deckers supplied to Berlin between 2005 and 2010. The heavyweight, three-door 13.7m MAN A39s carry 113 passengers, 83 of them seated, and are currently being refurbished at a cost of €50,000 (£43,900) each. MAN has lent 10 Lion’s City bendybuses to take up the slack while up to a dozen DLs a month are repaired.