Behind the scenes at Devon General

Title: Devon General As It Was 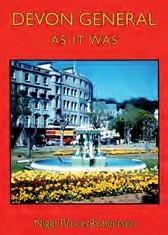 Nigel Bruce-Robertson fulfilled a childhood ambition when he joined Devon General from school in October 1963 as a traffic apprentice and stayed for six years before moving on to a Eastern National.

The seeds of this ambition were sown on school holiday visits to his grandparents in Milber, Newton Abbot where he became acquainted with the AECs and Leylands operated on route 12 to Paignton, which thrives today in Stagecoach ownership.