Volvo is developing a battery electric doubleand single-deck chassis for the UK, ready for series production beginning in 2021.

The new model, which is aimed initially at the London market, will have bodywork built in Egypt by MCV to a new design that takes account of Transport for London’s bus safety standard, particularly an 8deg rake to the driver’s windscreen and lower front dash.

As a double-decker, it will be 10.9m long, and while that length of single-decker may also appeal to London operators, there will be a 12m single-decker with a longer rear overhang and space for up to 44 seats. Overall capacity of a London double-decker will be 95 seated and standing passengers, with 21 seats in the lower saloon.

Four 66kW lithium iron phosphate battery packs will deliver 264kW of power, with the objective of operating for 100miles on a single 3 to 4hr overnight charge, which Volvo says will meet a high percentage of the daily duty cycles of London buses and will help deliver a guaranteed five-year battery life.

Three of the battery packs will be stacked in the rear ‘engine’ compartment, with the fourth in the offside wheelbase, directly ahead of the rear axle on double-deckers and on the roof of the single-decker. This will be a truly zero emission design, with electric heating.

Like BYD and Alexander Dennis with their jointly developed Enviro400EV, it will probably take advantage of the concession that permits zero emission vehicles to operate at an unladen weight of 19 rather than 18tonnes.

Work on the project began around nine months ago and a double-deck demonstrator should be operating by the second quarter of 2020, with the object of the vehicle being market ready from 2021.

The partnership with MCV will help Volvo distance itself from UK-based competitors, as Wrightbus has developed a range of battery electric, hydrogen fuel-cell and hybrid vehicles with its own chassis, while the joint venture with China’s BYD provides Alexander Dennis with its electric options for the UK.

Delays in connecting power to the three OppCharge stations installed in Harrogate bus station postponed the start of full operation of those eight single-deckers until the last quarter of this year, but Transdev has operated two at a time in the morning and evening peaks to gain some initial experience with them.

The move to overnight charging also ensures that the pair of opportunity charged B5LHC hybrid double-deckers on trial with Go-Ahead London, with New Routemasterstyle Wright SRM bodies, will remain unique.

Built in 2016, they finally entered service in August but have operated as conventional hybrids pending installation of the Siemens OppCharge gantries in Putney Heath and Peckham. These are due to be completed by December, allowing the vehicles to run for up to 8km (5miles) in zero emission mode. TfL originally planned to have four B5LHCs to test opportunity charging as an alternative to overnight charging, but scaled back the trial to just two.

The 10.9m electric double-decker chassis with three battery backs in the rear power compartment and a fourth ahead of the offside rear wheel.
VOLVO 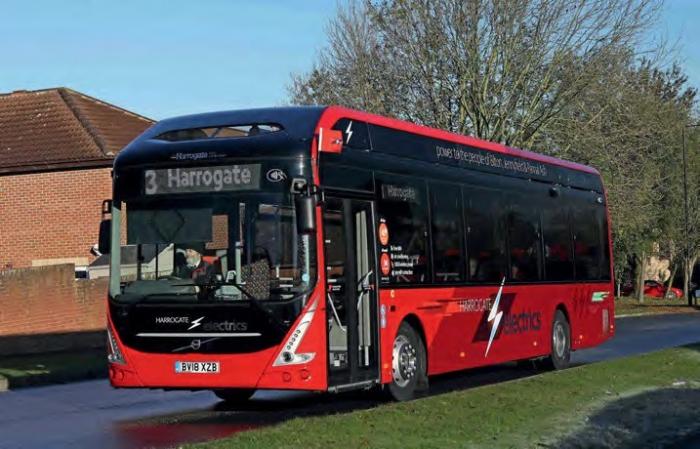