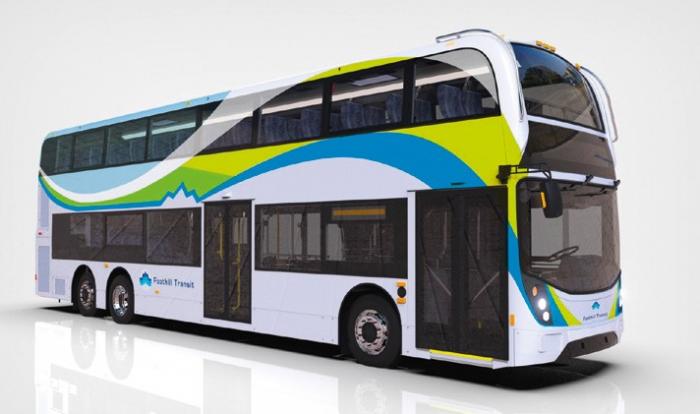 Foothill Transit’s Enviro500EVs will be the first of the type to be built.

The 13ft 6in (4.1m) high tri-axles form part of Foothill Transit’s plan to electrify its entire fleet by 2030 and are being purchased with a $1.4million (£1.1million) capital grant from a road toll revenue fund. They will replace a pair of compressed natural gas (CNG)- fuelled 40ft commuter express single-deckers, allowing the authority to increase trip capacity from 38 to 80 passengers per journey.

While Alexander Dennis is developing electric buses for the UK and New Zealand in a joint venture with China’s BYD, it is pursuing different approaches in North America, and the Foothill vehicles will use California-based Proterra’s motors and E2 battery technology, charging hardware and battery thermal management.

Foothill Transit has operated Proterra electric single-deckers since 2010 and now has 30 in its fleet of 370, the rest of which have CNG engines.

‘Deploying the Enviro500EV will be transformative for Los Angeles and for the United States,’ says Doran Barnes, executive director of Foothill Transit. ‘No other transit agency in the country utilises this technology on commuter express routes. And adding seats without increasing traffic congestion or local greenhouse gas emissions is the ultimate benefit for one of the nation’s most heavily travelled corridors.’

The order follows the trial of an Enviro500 diesel demonstrator in October 2016. ‘The customer response was overwhelmingly enthusiastic, proving that California was hungry for good design, smart public transit, and vastly improved ride quality,’ says the operator.

Alexander Dennis is the second Europeanowned manufacturer to take Proterra technology. Belgium’s Van Hool also is using it in an electric commuter coach it is developing for North America.