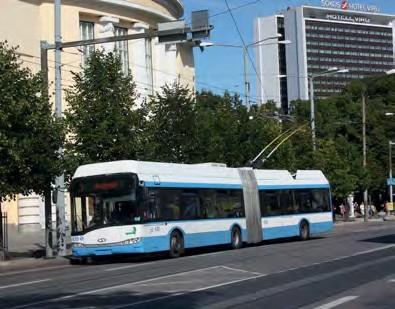 A Solaris Trollino 18 operating with TLT in August 2013.
JOHN YOUNG

Trolleybus operation in the Estonian capital Tallinn is set to end in three years’ time.

The system — the only one in this Baltic republic — started in 1965 and peaked at nine routes. It is down to four following the conversion of route 9 (Keskuse-Kopli) to diesel-electric hybrids in May. Conversion began with one route in 2012 and two more in 2015. The municipal TLT is due to take delivery of a further 20 new Volvo 7900 hybrids later this year, boosting its fleet of the type to 44.

Conversion of route 9 sounded the death knell for the last seven Czechbuilt Skoda 14Tr trolleybuses and its sole remaining articulated 15Tr, which is earmarked for preservation.

The system is scheduled to close in 2020, with 50 Polish-built Solaris Trollinos (32 12m rigids and 18 articulated 18m vehicles) providing the remaining four routes. Some of the Trollinos are only seven years old.

TLT says trolleybuses are too expensive to maintain and has rejected plans to replace them with battery electrics. ‘Trolleybuses that depend only on overhead contact grid wires are a burden to the city traffic,’ says director Enno Tamm. ‘It is clearly more reasonable to maintain trams and buses.’