Unions called an indefinite strike, which could have spread to Dublin Bus and Irish Rail, over the company’s imposition of a cuts package it says is needed to prevent Bus Éireann from becoming insolvent.

The two sides agreed on 3 March to attend talks at the Workplace Relations Commission and the company has suspended service cuts and a unilateral introduction of workplace practice changes pending the outcome of these discussions.

Until then, the long-distance Expressway network was in line for a series of cuts from 12 March when eight times a day service X7 (Clonmel-Kilkenny-Dublin-Dublin Airport) was to be withdrawn and the Dublin-Galway and Dublin-Limerick routes would each lose up to 28 journeys per week, representing 12-18% of the timetable.

J. J. Kavanagh offers seven trips a day over broadly the same route as the X7, although some journeys take up to 30min longer. From Kilkenny northwards, there are also train services, as well as coaches run by Dublin Coaches.

In April, Bus Éireann plans to withdraw the two journeys it runs between Dublin and Derry as route 33, leaving Ulsterbus’s three journeys numbered 274 in place.

Withdrawal of twice-daily route 21 (Westport-Athlone) is planned for May. The National Transport Authority is considering amending existing Public Service Obligation subsidised route 440 to provide double the level of service over the same route.

Bus Éireann is reported to have told the WRC that it may sell some assets, including property, to fund a voluntary redundancy scheme for staff as part of a revised survival plan. 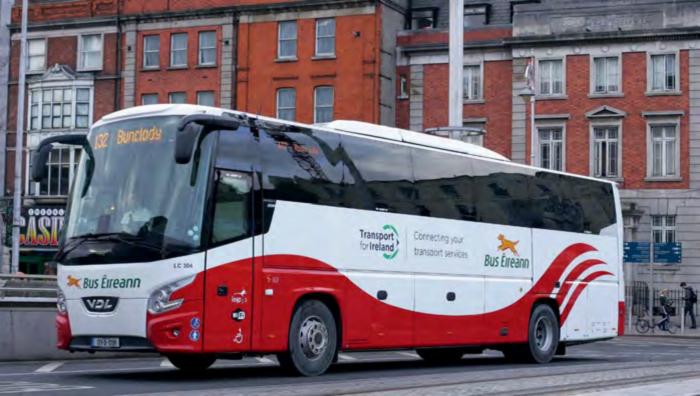 Bus Éireann LC304 (171 D 1259) is one of 38 VDL Futuras for Public Service Obligation routes. They are the first of the type in the state-owned fleet. DARREN HALL