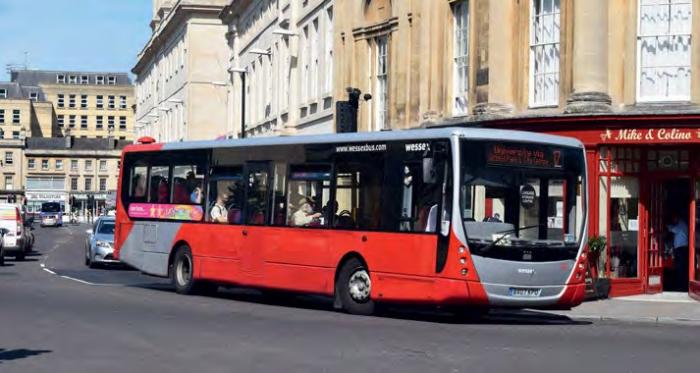 Rotala-owned Wessex Bus has suffered a series of setbacks, which reduces the overall size of its business.

It introduced a scaled down operation on a slightly different route, UoB, using three buses compared with five on the 17, but has since cancelled the registration.

In Bristol, Wessex has lost around 10 vehicles’ worth of work on four tendered routes to CT Plus, which will take over in September. Wessex will continue to run three routes subsidised by the city council.

It has also substantially reduced its commercial network. High profile route One, introduced in November 2015 and which ran up to every 8min, was withdrawn completely in July.

The company says: ‘Due to declining footfall and increased competition from our competitor [sic], we have made the decision to cease operating this service.’ The withdrawal was well publicised, including scrolling messages on real-time information screens at bus stops.

After only five weeks of operation, it also withdrew — at short notice — route 90, which ran south from the city centre. This high frequency service ran every 12min, mainly using red ex-London double-deckers.

Wessex issued a forthright press release, stating that a ‘competitor decided they could increase the frequency on the service and as a result flooded the service with buses’. It also claimed that some drivers ‘have been victims of verbal and physical abuse’.

Also ending is the Severn Net Flyer, a peak hour service to Avonmouth industrial areas, as funding for an 18-month trial has expired. However, it is taking over two routes in north Bristol from First in September, which partially replaced tendered Wessex services in September last year.