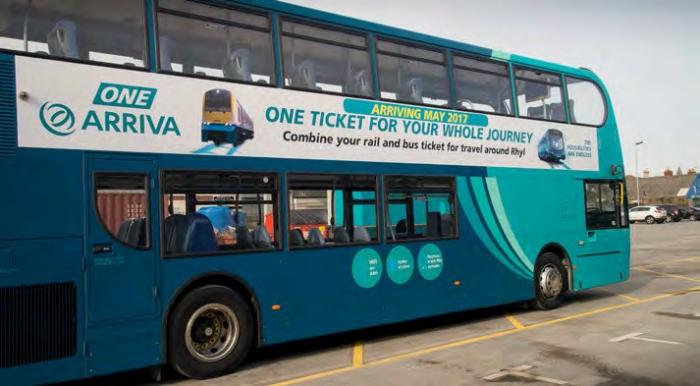 Arriva is piloting an integrated bus and rail initiative — branded One Arriva — in the North Wales seaside town of Rhyl.

Specific bus routes are highlighted in posters on the footbridge, which passengers arriving from England cross.

A large touch-screen display provides information about all services at the bus station, including those of independent operators, and mapping of the Rhyl area. The names of key attractions and holiday camps can be selected for the relevant bus times. The display may not be obvious to all bus passengers but its position inside the railway station building ensures it is close to the staffed ticket office and gates.

Posters displayed in Rhyl publicise the One Arriva ticket, which from May ‘allows you to combine your train and bus travel in and around Rhyl’.

However, the ticket is not available to Rhyl residents, as it is only for those who travel to Rhyl by Arriva train. It will be available from train conductors and Rhyl railway station but not from bus drivers. It will not be configured as a bus-plus-rail ticket, for holidaymakers or residents to catch the bus to the railway station and train from there.

The established PlusBus add-on costs £2.50 for one day or £12 for seven days, and includes independent operator P. & O. Lloyd as well as Arriva. It covers buses to the general hospital at Bodelwyddan and such attractions as Rhuddlan Castle, Towyn funfair and Dyserth waterfall.

The One Arriva ticket will cost £4 for one day or £11 for seven days and will be accepted by three independents serving Rhyl under contract to the local authority. It will be valid on all routes from Rhyl bus station as far as their ultimate destinations, including Chester, Denbigh and Llandudno.

Arriva says it intends to roll out the One Arriva initiative to other railway stations where the group also runs buses.

■ FirstGroup is promising ‘genuine joined up journeys’ when it takes over the South Western rail franchise from Stagecoach on 20 August in partnership with Hong Kong-based MTR Corporation. It says First MTR South Western Trains will provide connections with other local rail and bus services.