PAUL CHANCELLOR brings a new series to our pages this month, using the Colour-Rail photograph collection to compare towns’ and cities’ bus scenes today with how they were in past decades. He starts 46 years ago in the largest city in Devon when Leyland Nationals and Atlanteans were to the fore. 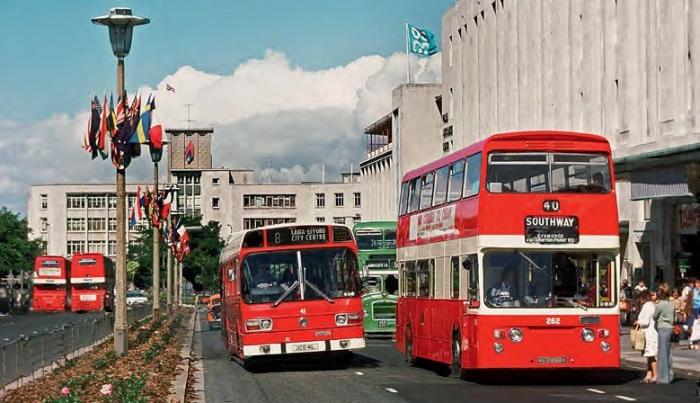 June 1977 and Royal Parade is served by three of Plymouth City Transport’s Park Royal-bodied Leyland Atlanteans, with dual-door PDR2/1 262 (MCO 262H) about to be passed by Leyland National 41 (UCO 41L) from a relatively short-lived intake of 60 bought in 1972-74 instead of double-deckers. Just visible between them is Western National 1969 (468 FTT), an ECW-bodied Bristol Lodekka FLF6G new in 1960. 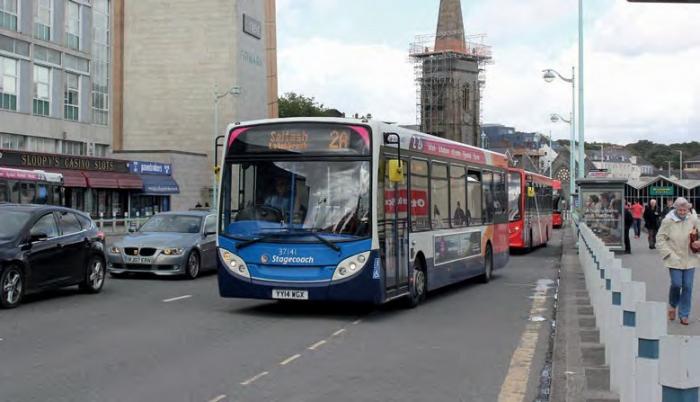 Among vehicles that Stagecoach transferred into Plymouth was Alexander Dennis Enviro200 37141 (YY14 WGX) previously in Exeter. Directly behind is an Enviro200 in the Plymouth Citybus fleet and behind that is the distinctively tall outline of a gas-powered MAN EcoCity that Go-Ahead transferred last year from the Anglian fleet in Norfolk.

Until relatively recently, visitors to Plymouth would have seen relatively little change in bus operations in the city save for a reduction in services, updating of the fleets and just a livery and name change from Western National to First for the ‘country’ vehicles plying for trade alongside Plymouth Citybus.