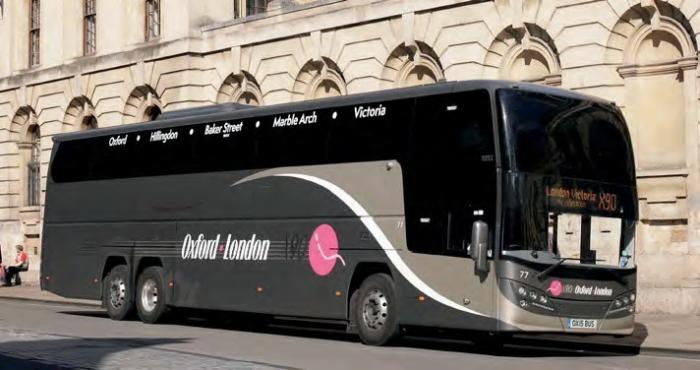 Traffic congestion and competition from trains appears to be hitting hitherto booming demand for coach services on the M40 between Oxford and London.

The Oxford Bus Company’s long-established X90 coach was reduced from a mainly 20min frequency to every 30min at the end of October. It will also start about 30min later each morning. 1hr later on Sundays.

Fares have also been reduced. The previous adult single of £15 is now £8, though reductions for children, students and senior citizens are less dramatic. All return tickets are now valid for three months, and the adult price of £14 replaces day and next-day returns at £18, and period returns of £20.

That made single fares half of those on Stagecoach’s rival Oxford Tube, and returns about two-thirds. However, Stagecoach has responded with lower Tube fares from the same date until 13 January.

These are now just £1 dearer than the X90, and are accompanied by a marketing campaign that emphasises 456 more departures than the X90 each week, with 45,900 more seats available on its Van Hool Astromega doubledeckers over the same period.

The new X90 timetable reflects deteriorating traffic conditions, as the approximate travel time of 100min shown on the previous timetable is now advertised as 120min, the same as most Oxford Tube journeys.

Arriva’s Chiltern Railways offers two trains an hour between Oxford and London Marylebone, with journey times of between 65min and 70min. Off-peak day returns were available in November for £26.60, but advance singles started at £7.

Stagecoach is believed to be studying the impact of the Chiltern service, which started in December 2016, before finalising plans to replace its Astromega fleet, which is five years old next year.