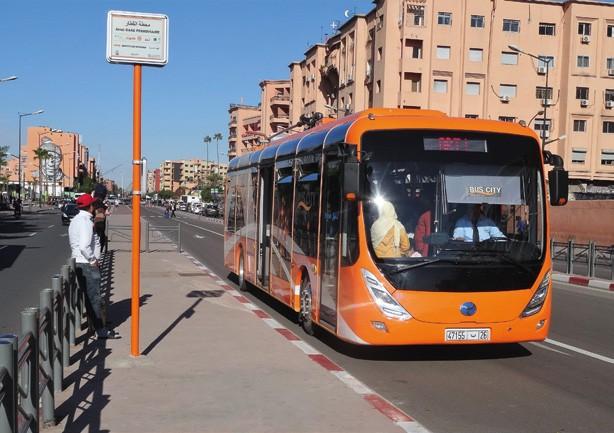 Alsa operates 15 Dongfeng Veyron G92 trolleybuses in Marrakech on an 11km first phase of a larger network in the Moroccan city. Operation started in September last year. Power comes from solar energy and batteries are fitted for operation beyond the wires.
BILL ALLANSON

Alsa, the Spanish and Moroccan division of National Express Group has won a major bus service contract in the Moroccan cities of Rabat, Salé and Temara. Rabat is second most populous city in the kingdom and this contract will be Alsa’s largest there.

The 500- bus contract is expected to carry 109million passengers a year across 61 routes. It is initially for 15 years, with an option of a further seven-year extension, with services starting within a year.

Alsa will operate the contract as the majority shareholder of a joint venture with locally based CityBus and is expected to secure €1billion (£890million) of revenue over the life of the contract.

NatEx chief executive Dean Finch says: ‘We have been steadily growing our presence in Morocco as part of our strategy to expand in rapidly growing urban areas, helping to diversify our earnings. It is particularly pleasing that our track record for service excellence in Morocco played a significant part in this successful bid. We hope to build on this success and secure further expansion in the coming years.’

Alsa’s first Moroccan contract was awarded in 1999, managing urban transport in Marrakech, and it subsequently added Agadir in 2010, Tangier in 2013 and Khourigba in 2015.

■ National Express acquired Swiss ski transfer business AlpyBus at the start of 2016 and has consolidated this presence with a further three acquisitions in the Geneva area, expanding operations into the summer tourist, urban bus and schoolbus markets and increasing profits by 52.6% in the first half of this year.