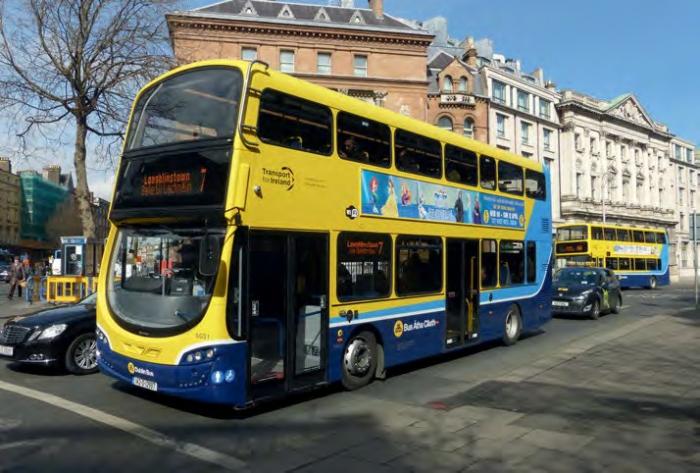 Ireland’s National Transport Authority (NTA) has embarked on what it says will be a ‘radical and transformational’ change to the bus network in Dublin, with a new emphasis on radial and orbital routes, bus rapid transit (BRT) corridors and a new livery to provide ‘a modern look and feel’.

Branded BusConnects, the €1billion (£870million) project is part of the NTA’s 2016-35 transport strategy for the Greater Dublin region, which also will see major investment made in expanding heavy rail, metro and Luas tram services.

‘Dublin is a low density city,’ says the NTA. ‘We don’t have skyscrapers and most people live in single house units. This means that very few areas of Dublin have the size and concentration of population to support railbased public transport. For most corridors in Dublin, bus transport represents the optimum solution.

‘But we now need sweeping changes to our bus system to enable it to fully meet the needs of a modern public transport system; one that enables more people to travel to more places, conveniently and efficiently.’

It says BusConnects will transform the system so that journeys by bus will be fast, reliable, punctual, convenient and affordable. ‘It will enable more people to travel by bus than before and allow bus commuting to become a viable and attractive choice for employees, students, shoppers and visitors.’

The fare structure will be simplified to permit seamless movement between transport services without financial penalty, although it has yet to decide whether to have a touch in-only flat fare or a simplified graduated fares structure requiring passengers to touch in as they board and touch out as they leave. Boarding times will be speeded up by making payment cashless as soon as possible, using credit and debit cards and mobile phones as well as the Leap smartcard which already accounts for over 70% of fare payments.

Bus stops will be upgraded by providing what it says will be better signage and additional shelters, particularly at interchange points. ‘The current facilities do not reflect the standard needed to make the overall system attractive and easy to use,’ it says. The new stops will all display route and fare information with stop-specific timetables, with greater provision of real-time information on the new corridors and at some other points.

Starting next year, it will begin a transition from Euro6 diesel to low-emission vehicle technology, to be completed by 2030. It has yet to decide which technology to adopt, but observes that biogas is a mature option already extensively available. A decision will be taken by the end of this year, possibly to adopt a combination of technologies, and it aims to have 500 — around half the fleet — in service by 2023.

A new livery will be commissioned to replace the current Dublin Bus two-tone blue and yellow. The NTA, which also trades as Transport for Ireland, has produced two possible designs with varying proportions and shades of green, blue and white and will seek people’s views before selecting a final design.

‘As well as reflecting the overall ambition of transforming the bus system, this will also accommodate the potential of additional operators providing bus services as part of the overall network,’ it explains, adding that ‘we will ensure that the new bus livery is attractive and conveys the image of a modern, effective transit system’.

The most drastic change envisaged is to the network of 130 routes, the majority of which radiate from the city centre, requiring most passengers to travel through the congested heart even when they have no need to be there.

BusConnect aims to change this through the creation of 11 radial corridors, three radial BRT corridors and three orbital corridors, all supported by continuous bus priority measures.

The orbital routes will intersect with all of the radial routes, offering journey possibilities between suburbs and local centres without having to cross the city centre.

Two new livery ideas proposed by the NTA with Transport for Ireland branding. 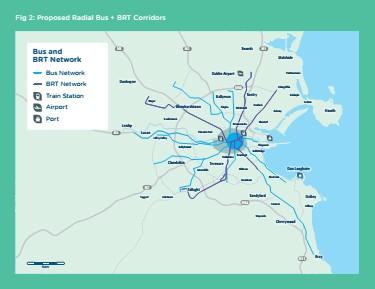 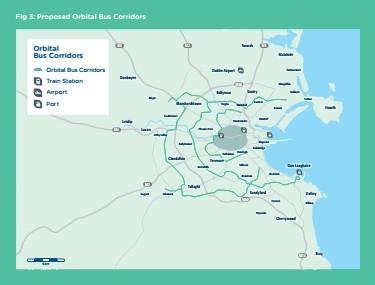 Three orbital routes would link with the radial lines.

At present, the busiest routes only have bus lanes along less than a third of their length. The NTA says congestion on the nonprioritised sections undermines punctuality, reliability and predictability. ‘As a result, many people do not see any benefit in choosing bus transport.’

It says some of the improvements will require road widening and changes to parking arrangements, but argues that they will benefit all users of the corridors, as cyclists will have more segregated routes (Dutch-style cycle lanes on the outer part of the footpath), pedestrian safety will be enhanced, car drivers will have less interaction with buses and cyclists, the roads will be resurfaced and local centres on the routes will be landscaped.

BRT — running at higher speeds and carrying larger volumes of passengers in articulated single-deckers — is proposed for the three radial corridors where passenger numbers are forecast to approach the limits of conventional bus route capacity.

‘It will represent a major step change in the provision of bus services on some of the busier bus corridors,’ says the NTA. ‘A typical BRT scheme uses multi-door vehicles, higher platforms for level boarding and stops that are spaced farther apart than those that serve conventional buses. Using different vehicles than normal buses, a BRT route can cater for a higher volume of passengers than a normal bus corridor.’

Five bus-based park-&-ride sites are proposed — four to the west and north of the city, one at Bray Southern Cross to the south — to complement three rail and two Luas trambased sites. These five will all be served by high frequency routes, supplemented where necessary by additional dedicated routes. The NTA says that parking charges and bus fares would be integrated.

It believes that the revised route network can begin to be implemented from next year and, once planning consent is secured, each bus corridor could be constructed over two to two-and-a-half years, with several able to be built concurrently. 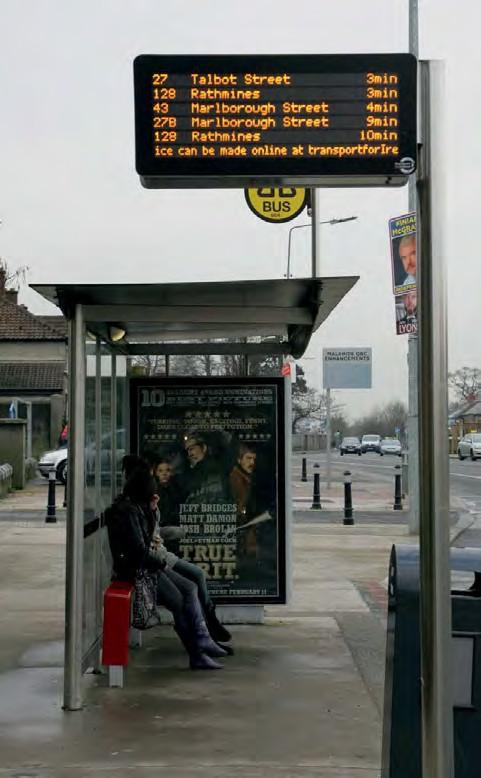 Bus stops will be upgraded with more shelters and real-time information.
DARREN HALL