A one-time bus driver and lifelong socialist, DOUGIE HARRISON found himself in a capitalist environment when for 27 years he was a non-executive director of Strathclyde’s Buses and First Glasgow, nominated by trades unions to represent the interests of employees. He looks back at why this unique arrangement came to happen and how he was sometimes able to help influence decisions 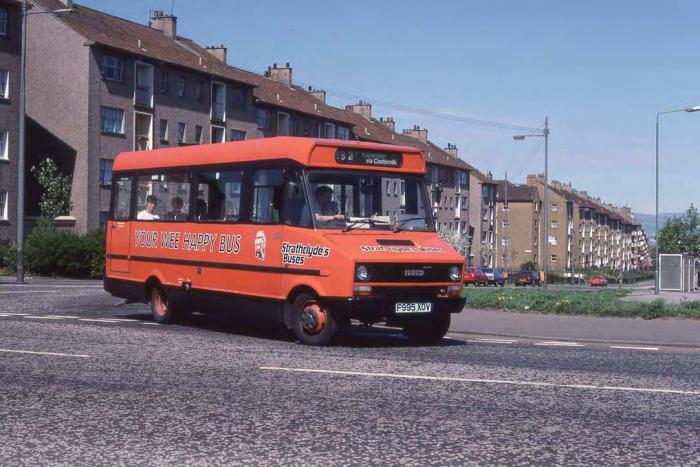 Strathclyde PTE introduced urban minibuses to various parts of Glasgow from 1983 and the arm’s length Strathclyde’s Buses greatly increased that part of the fleet, branding them as Your Wee Happy Bus. Iveco Daily M301 (F995 XOV), with 25-seat Carlyle body, was new in 1989 and was photographed the following year in the large south Glasgow housing estate of Castlemilk, operating a shoppers’ service that previously used double-deckers.
IAIN MACGREGOR

My 14 years as the economist of the Scottish Trades Union Congress (STUC) meant that I had to become something of an expert in the economics of public transport in Scotland. I had always been interested in public transport, believing it vital to human progress decades before today’s widespread concern about climate change.