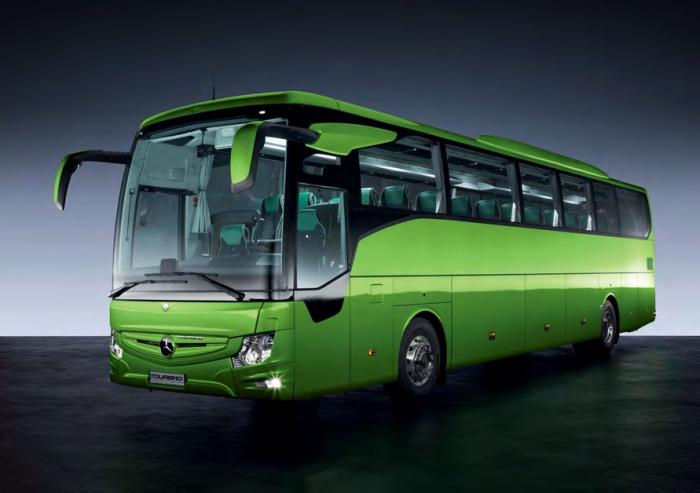 Daimler Buses has unveiled an all-new version of the Mercedes-Benz Tourismo RHD high-deck touring coach, which forms the backbone of coach fleets throughout Europe and beyond.

The wraps came off the new model in Brussels ahead of its public debut at the Busworld show in Kortrijk, Belgium in October.

Good news for British and Irish operators is that all four right-hand-drive versions of the high-deck Turkish-built integral are now being offered and this doubles the range available from the Hosdere plant near Istanbul.

The Tourismo can be ordered with either a new 456hp engine based on the trusty OM470 block or with three other output versions of the in-line six-cylinder unit. New is the smaller OM936 7.7litre power pack used in the Intouro and Citaro G articulated city bus. First deliveries are scheduled for early 2018.

The third-generation high-decker has been thoroughly made over although there are strong visual links with the outgoing Tourismo. Around 26,000 have been built since the first Tourismo-badged coach appeared 23 years ago.

Daimler Buses CEO Hartmut Schick describes the Tourismo product range as a ‘genuine all-rounder’, adding: ‘We have invested €400 million (£350million) in the development and production of a completely new touring coach generation.’

At the front end, the Mercedes-Benz grille has morphed into a mask, which is painted in the body colour as standard. It can also come with chromeplated applications. Shading is used to make the A-pillars appear invisible and both driver’s window and door are flush with the smooth body. Mercedes claims that the sculpted tall veeshape of the rear end has been compared to an ionic pillar.

The new coach has a drag coefficient of 0.33CD, and Daimler says the slippery shape makes it cheaper to operate. Weight reductions totalling 450kg have cut claimed fuel consumption by as much as 4.5% compared to the previous versions. Lowheight models remain in the range.

Among the innovations on board is a feature that lowers the Tourismo’s body automatically by 20mm at speeds of more than 95km/h (59mph). The body rises again once the speed drops. Mercedes-Benz says this cuts the air resistance of the frontal area, reducing fuel consumption and emissions.