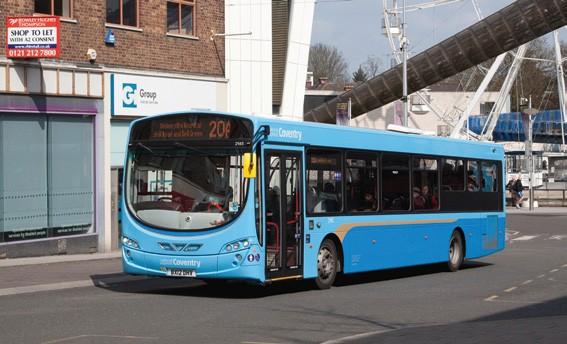 Transport for West Midlands will retain the separate sky blue identity of National Express’s Coventry fleet in the rebranding that will create a single red West Midlands Bus brand for routes in the rest of the conurbation.

TfWM confirmed in July that the red bus identity (Buses last month) will be rolled out across routes in Birmingham and the Black Country as part of a new West Midlands Transport (WMT) brand that also will have orange trains, blue trams and green cycling infrastructure.

‘Branding is not merely dressing, it is about more people using public transport in an easy way,’ says West Midlands mayor Andy Street. ‘Think of the iconic red London bus. It is recognised the world over and the capital is rightly proud of it. This is our chance to inspire a similar sense of pride and identity for people in our region and the transport links that connect their lives.

‘For the first time we will have trains, trams, buses and cycles with one uniting identity which is enduring and, over time, becomes something which defines the West Midlands.

‘We are fortunate the stars have aligned to enable us to do this in a cost effective way. TfWM recently took over the Metro so we would have needed to rebrand this in any case. Similarly, rebranding was part of the new rail franchise terms and the bus companies are constantly refreshing their own branding.

‘We will be rebranding bus stops and stations in the months and years to come as part of the normal process of replacing them, meaning while this will be gradual, it will mostly be natural.’

TfWM says that, through the West Midlands Bus Alliance, it is working with all operators in the use of the new branding. ‘Buses operated in Coventry by National Express are expected to retain their distinctive sky blue livery but will carry the WMT logo,’ it says. The Coventry identity was introduced in 1999 to counter low morale in a city that sees itself as separate from the West Midlands.

■ National Express says it will soon launch an on-demand bus service in the West Midlands.