Bard’s Bus is banished from Birmingham 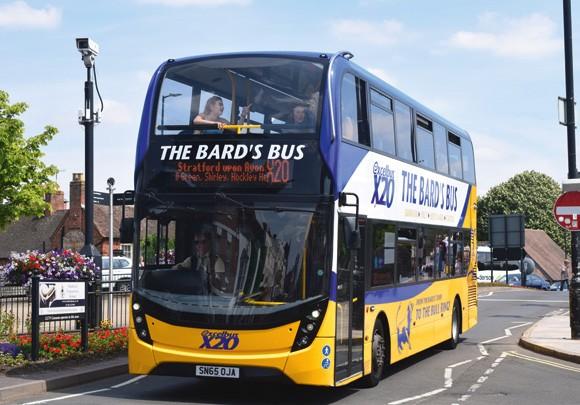 One of Birmingham’s last interurban links to a town beyond the West Midlands conurbation is reduced to a Sunday-only service at the beginning of September.

The X20, marketed by Johnson’s of Henleyin- Arden as The Bard’s Bus, provides an hourly link from England’s second city via Henley to Stratford-upon-Avon, with a journey time of around 90min.

The route was once run by Midland Red, but has had a chequered history since deregulation, with several operators running it before Johnsons took over in 2009. It has managed to turn much of the one-time tendered service a commercial proposition.

On Mondays to Saturdays, replacement route 20 will continue to offer an hourly service from Stratford, but only as far as Shirley, a suburb of Solihull. It will be diverted from its current route to terminate at the railway station.

On Sundays, when Warwickshire County Council funds the service, buses will operate as route X50, formalising the current through workings of linked route 50 from Chipping Norton to Stratford, which then continue as X20 to Birmingham. Stagecoach Midlands provides the Chipping Norton route commercially on other days.

The revised route reduces the peak requirement from three buses to two. Johnsons has bought two generations of double-deckers for the service, a trio of Scania N230UD/Optare Olympus from 2009 was replaced by three Alexander Dennis Enviro400 MMCs in autumn 2015.