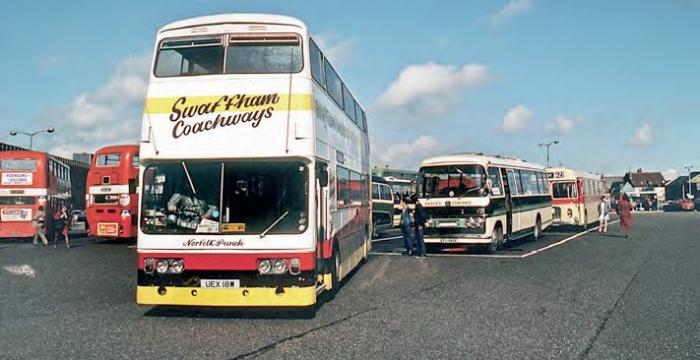 Centre stage in this 1982 scene at King’s Lynn bus station is Swaffham Coachways UEX 18W, a 33ft Roe-bodied Leyland Atlantean PDR2/1 new to British Overseas Airways Corporation (BOAC) in July 1971 registered GML 846J. It was one of five of these 65-seaters that BOAC (later British Airways) operated on its coach service between Heathrow Airport and its terminal opposite Victoria Coach Station in London. Swaffham Coachways had two of these vehicles used on market day and other rural services, both re-registered on acquisition. Behind it is Eagles Coaches of Castle Acre EFU 845L, a Plaxton Panorama-bodied Bedford SB5 new to Applebys in Lincolnshire in 1973. The ECW-bodied Bristol RELH behind may look like it is an Eastern Counties vehicle, but is operated by Rosemary Coaches. The poppy red and white Bristol VRTs on the left are in the Eastern Counties fleet. 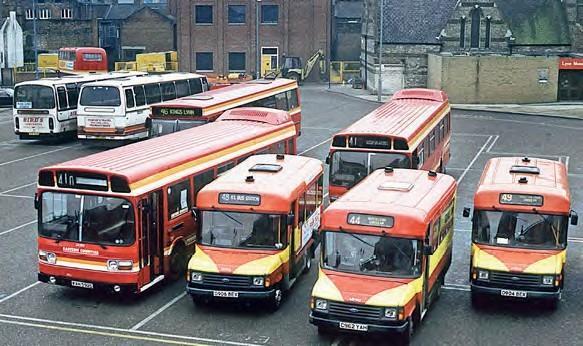 Eastern Counties, during its seven years of management ownership, is dominant in this 1991 scene viewed from the car park that overlooks King’s Lynn bus station. Three Ford Transit minibuses, two Leyland Nationals and a Plaxton Derwent-bodied Dennis Javelin are laying over, while an ECW-bodied Bristol VRT departs in the background. Independents are on represented by Fowlers of Holbeach Drove with a Duple Dominant-bodied ex-London Country Green Line Leyland Tiger and a Plaxton Supreme-bodied coach from Bird’s of Hunstanton.

Stagecoach was still to the fore in 2017, by which time its corporate identity had extinguished the Norfolk Green name and colours. Optare Versa 25268 (YJ58 VCC) and Optare Solo 47908 (YJ09 LBG) were acquired with the Norfolk Green business, but TransBus Pointer Dart 34420 (KV53 EYW) had been transferred within Stagecoach East.

The rural nature of the area surrounding the north Norfolk town of King’s Lynn helped make it something of a stronghold of independent operators over the years, supplementing the long distance and town routes provided for many by Tilling and later National Bus Company-owned Eastern Counties. Physically, the town centre has changed little in recent years and other than the modernising of the stands, the bus station remains much as it has been for at least the past 40 years.