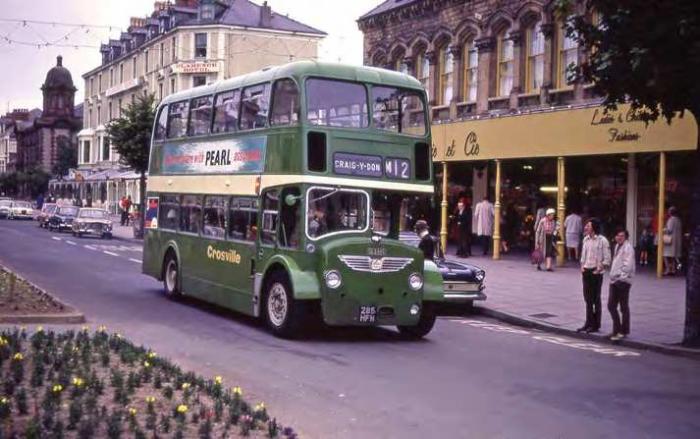 The National Bus Company’s corporate identity was less than a year old when Iain MacGregor visited north Wales in July 1973 and found Crosville — then with a route network stretching from Cheshire and Shropshire across north and mid Wales — in a slow state of image transformation.

The fleetname and livery of the Bristol Lodekka he photographed on a local service in Gloddeath Street in Llandudno predated the new look. The upper and lower case lettering was of a modern style that broke away from gold capital letters, the green was Tilling’s shade rather than NBC’s leaf variety and the relief colour was cream rather than the new white, which Crosville opted not to use. However, the corporate look was creeping in, as the wheels are grey.

Those are all minor matters, as this was no ordinary Lodekka. DLG949 (285 HFM), new in October 1958, was the first built with a flat lower saloon floor rather than a slightly sunken centre gangway. It was effectively the prototype of what became the 27ft rear-entrance FS model in 1960, but was classed as an LDS6G, as the second prototype (for Eastern National) was a 30ft version classed LDL6G.