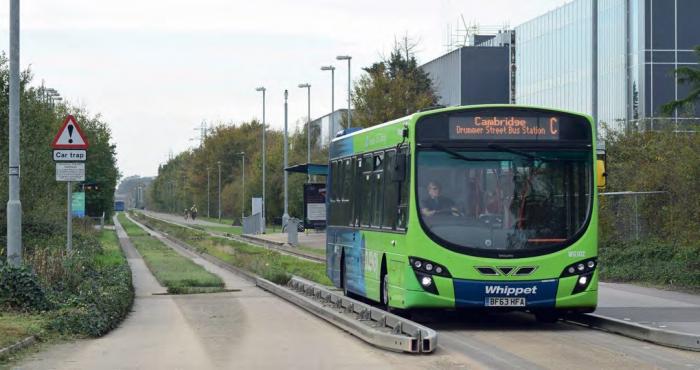 The Cambridgeshire & Peterborough Combined Authority has commissioned a review of the future operation of bus services following changes that have seen Tower Transit — which supports route franchising — pass its Whippet Coaches business on to a new company headed by the Australian-owned business’s former chief executive officer.

Tower Transit, formed by Brisbane-based Transit Systems to acquire part of First’s London bus operation in June 2013, is refocusing on franchised bus opportunities in London and Singapore, while Whippet has pulled out of commercial bus service provision, leaving Stagecoach as sole operator on the guided busway connecting Cambridge and St Ives.

Tower Transit sold its 87-vehicle Impact Group coach business to HCT Group in August (Buses October) and during October completed the transfer of Whippet to Ascendal Group, which was incorporated in March with Andrew Gibson and former Tower Transit CEO Adam Leishman as its directors. Ascendal’s registered office is at the Whippet base in Swavesey.

Tower Transit acquired Whippet in November 2014 from the third generation of the Lee family who founded it in 1919. It then operated around 60 vehicles.

Whippet still strongly supports a move to route franchising, and gave notice to cancel its two remaining commercial routes during November. It advised passengers not to buy longer period tickets ‘just in case the routes stop running from Saturday 10 November 2018’.

It had already handed back three council contracts in the summer — 31 (Cambridge- Barley), 75 (Cambridge-Wrestlingworth) and 196 (Waterbeach-Cambridge) — which passed to other operators, while in September the combined authority agreed funding to continue St Neots town services until March.

Withdrawal of route X3 between Huntingdon, Papworth, Cambourne and Cambridge would have left some villages without any buses. Managing director Charlie Hamilton, who remains in post under Ascendal ownership, told BBC Radio Cambridgeshire: ‘It costs us more to put out the service every morning than we get back in revenue from our passengers’, adding that the company had ‘been subsidising it for well over two years now’, viewing it as an investment in future growth.

Nonetheless, the X3 had already been reduced from hourly to every 90min in July. Stagecoach also operates between Cambourne and Cambridge, a fast Citi 4 every 20min and an hourly slower 18, and press reports indicated that it was considering extending a few journeys beyond Cambourne to serve villages that would otherwise be cut off. However, four weeks before withdrawal, the combined authority and South Cambridgeshire District Council said they would provide £10,000 to keep the current X3 timetable running until March.

By then, the combined authority expects to have a new bus strategy in place. Mayor James Palmer says: ‘I have long said that the bus system we have in Cambridgeshire and Peterborough is not working for people and this is yet more evidence that the current status quo is not sustainable.

‘The authority has commissioned a review into buses which will report in November. Options open to me on buses include things like franchising, and all will be considered.’

‘We are thrilled that the elected officials have agreed to financially support the X3, without which the loss-making services would have stopped,’ says Hamilton. ‘This is a clear demonstration of the need for franchising in the Cambridgeshire and Peterborough region, and we are pleased that mayor Palmer’s bus review will consider all options to best serve the local communities that rely so heavily on public transport.’

As Buses went to press, Whippet’s website stated that it was awaiting ‘confirmation that the service will continue beyond Friday 9 November 2018’, as the traffic commissioner had not yet published acceptance of a new short notice registration.

There is no reprieve though for guided busway route C. Originally an hourly service between Cambridge and Somersham, it was shortened during 2017 so that, in the main, three buses operate half-hourly between the bus stations in St Ives and Cambridge.

Stagecoach offers eight buses an hour over the same section.

As the ending of the Whippet service leaves Stagecoach as the sole operator north of Cambridge, it has caused the county council’s multi-operator Busway smartcard to be withdrawn. The 1,585 cards in circulation can be used until the end of January.

Whippet will continue to use the southern section of guided busway between Cambridge station and Addenbrooke’s Hospital. Orbital route U, financed by the university and developers, was enhanced at the beginning of October. A Sunday service has been added, as well as earlier and later buses on weekdays, and later buses on Saturdays.

In its final weeks, Whippet put out several messages on Twitter to say that route C journeys would not run owing to driver shortage.

The changes have left Whippet with seven registered bus routes, including Huntingdon local service 400/401, which at £24.84 per passenger journey is the second most heavilysubsidised service in Cambridgeshire. As well as its 25-strong bus fleet, it operates 24 coaches, mainly for National Express.