The largest state-owned fleet in Scotland from 1961 to 1985, Western SMT maintained a traditional look for its coaches and buses, but through all its changes of name it has always been registered at addresses in England 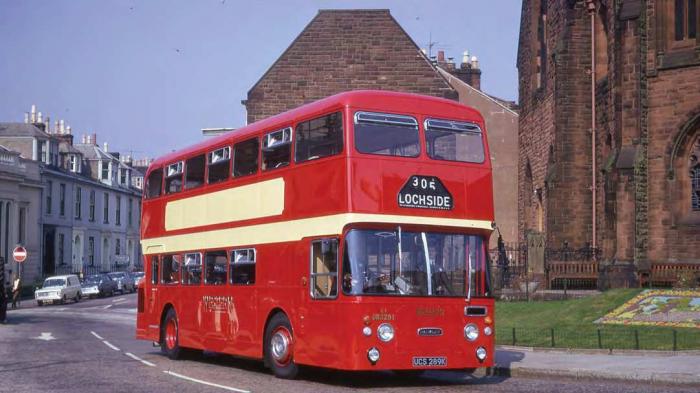 Then new Western SMT DR2291 (UCS 289K), one of nine Northern Counties-bodied Daimler Fleetlines delivered in 1971, operating a town service in Dumfries. The prefix letters in the fleetnumber are D for Dumfries and R for Daimler double-deck.
IAIN MACGREGOR

After the Alexander company was split in three in 1961, Western SMT was the Scottish Bus Group’s largest subsidiary, with over 1,000 vehicles serving most of the country to the south and west of Glasgow. Its territory included the Isle of Bute and a depot across the English border in the city of Carlisle, and its Anglo-Scottish coach services included the primarily overnight route between Glasgow and London, which in pre-motorway days followed the A66 between Carlisle and Scotch Corner before joining the A1 Great North Road. From October 1970, when SBG broke up the MacBraynes bus operation, it added parts of rural Argyll to its patch.