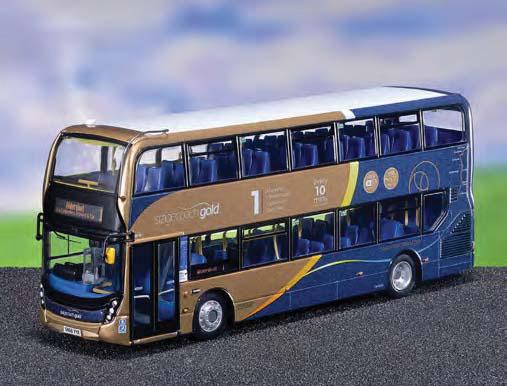 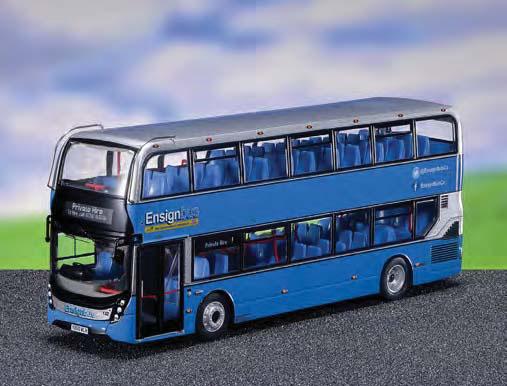 The Chinese factory producing Northcord’s models has returned to work following measures to control the coronavirus pandemic there, allowing the delayed release of these eighth and 20th releases in its series of highly detailed single-piece castings of the Alexander Dennis Enviro400 MMC.

Model ukbus 6516 shows a 10.9m Stagecoach vehicle in Gold livery for service 1 to Aldershot and comes just as Stagecoach has begun to phase out this premium brand, repainting some in Devon into long distance yellow and gold, while others may go into the standard blue, green, yellow and white.

Detail includes the square gasket-mounted side windows and a single nearside front tree protector on the upper deck, as well as all logos and lettering in miniature.

There is a bit of model manufacturer’s licence in uk0063, the Ensignbus vehicle, as this uses the casting of the 10.9m Enviro400 to represent a vehicle that in real life is an 86-seat 11.5m example, but that surely is a tiny price to pay for something that otherwise is true to the original.

The original YX66 WLH was new to Go-Goodwins in Eccles, Greater Manchester in January 2017 and was sold to Ensignbus two years later. The model depicts the Essex independent’s distinctive blue and silver livery, complete with such detail as fleetnumbers, fleetnames, Twitter and Facebook addresses and the additional marker lights above the upper deck windows on both sides and on the front and rear bumpers.

There also is lettering below the fleetnames to promote the operator’s success in being judged Top Independent Operator in the UK Bus Awards in 2018, as indeed it also was last November.

Like the Stagecoach vehicle, this has square-edged gasket glazing and it has not just one but two tree protectors. The three destination displays show it operating a private hire and there is an advertisement for this aspect of the Ensignbus business on the rear engine cover.

Both models are limited editions of 1,008 being distributed worldwide, principally in the UK, Hong Kong and Japan.