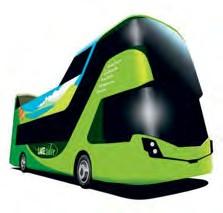 Stagecoach Cumbria & North Lancashire has ordered the group’s first new open-top doubledeckers for the UK, for route 599 between Bowness and Grasmere in the Lake District, for delivery this summer.

The company has told staff that it has been successful in bidding for the vehicles — seven Wright Gemini 3-bodied Volvo B5TLs — as part of the group’s yet to be announced capital investment programme for 2017/18. Although it has bought Wright-bodied Volvo single-deckers for Cambridgeshire Busway services, these are the first Wright-bodied double-deckers it has ordered outside London and its first B5TLs.

The seven, with covered front section of the upper deck and glazed staircase, are based on the design of 30 similar vehicles delivered last year to Lothian Buses’ Edinburgh Bus Tours fleet, but have more comfortable seating downstairs, as the 599 also is a local bus route.

Ray Stenning’s Best Impressions consultancy has created a new Lakesider livery for them, with a look that is extended to all supporting publicity.

The bespoke interior will include USB charging at seats under cover on both decks.