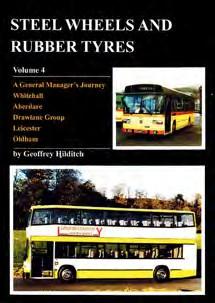 Those who have read the first three parts of Geoffrey Hilditch’s autobiography, recalling a career in transport that began as a childhood interest, peaked when he was general manager of municipal undertakings in Great Yarmouth, Halifax and Leicester and ended in 1999 with the sale of an independent operator, will have waited eagerly for this final part. Like the third part, it is published posthumously, as Hilditch died in June 2014, aged 88.