£56m support for another 363 green buses 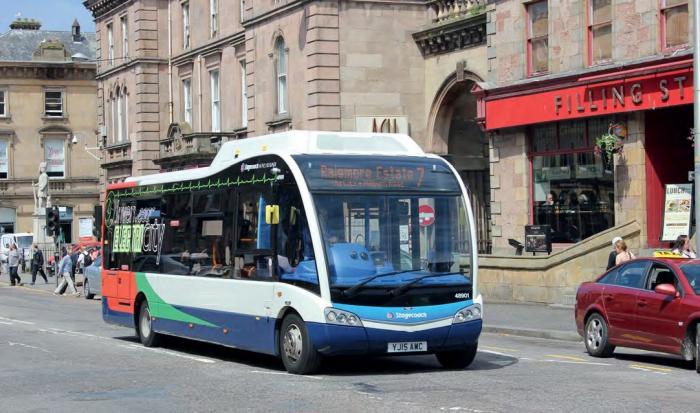 The 16 Optare electric buses for Stagecoach South Wales will be a mixture of Metrocity and Solo EVs. The Solos will be similar to 48901 (YJ15 AWC), one of five that Stagecoach North Scotland has been operating in Inverness since 2015.

Two separate UK government announcements could put up to 243 additional battery electric, 53 hydrogen fuel-cell electric and 67 biogas buses into service in locations from Aberdeen and Belfast to Cardiff, London and Brighton.

England’s bus minister, Nus Ghani, revealed the winners of £48million of Ultra Low Emission Bus Scheme (ULEBS) funding at this year’s UK Bus Summit in London on 6 February, the day after the Department for Transport’s future of mobility minister, Jesse Norman, announced that £8.37million of a £14million allocation of funds for hydrogen fuel-cell vehicles and fuelling facilities will go towards bus projects in England, Scotland and Northern Ireland.

ULEBS money will help pay for 20 of the hydrogen fuel-cell vehicles, single-deckers — manufacturer still to be announced — to be operated by Go-Ahead’s Metrobus subsidiary on the partially guided Crawley-Gatwick Fastway rapid transit service.

£750,000 of the grant is for hydrogen fuelling infrastructure, while £3.61million will help bridge the gap in price between these zero emission buses and Euro6 diesels. Further funding is expected from the Europe-wide JIVE2 fund and a third, as yet undisclosed partner.

The other 33 fuel-cell buses are being funded by the separate scheme to promote the development of hydrogen-fuelled vehicles, with three to be operated in Belfast, five in Aberdeen and 25 in Merseyside. State-owned Translink is part of a Northern Ireland consortium receiving £1.95million towards the purchase of the buses and a fuelling station in Belfast.

£6.42million goes to the consortium behind the Merseyside and Aberdeen projects. Besides Aberdeen City Council and PTE Merseytravel, fuel suppliers BOC and Arcola Energy are involved. The funding will provide Merseytravel with a fuelling facility at St Helens. There already is one in Aberdeen, where JIVE funding is adding 20 Wright StreetDeck fuel-cell double-deckers to the 10 Van Hool single-deckers operating in the city.

Although biogas vehicles do not fall within the strict criteria for this latest round of ULEBS funding, Nottingham City Transport has secured £1.13million to double the capacity of the biomethane fuelling infrastructure at its Lower Parliament Street depot in the city centre.

This will enable it to add 67 Alexander Dennis Enviro400CBG City-bodied Scania N280UD biogas double-deckers to the 53 introduced in 2017/18 on five of its busiest routes. It is spending £20million on the additional vehicles, with the first expected on its Brown Line 17 to Bulwell in April, followed by the Pink Line 28 to Bilborough in the summer and for the others to be in service by November.

Although they are more expensive to buy than equivalent Euro6 diesels, NCT says biogas vehicles are cheaper to operate, with those savings delivering a payback within their operational lifetime. More than half the double-deck fleet will be fuelled by biogas by the end of the year, and all pre-2011 diesels will be replaced.

The ULEBS grants for battery electric buses are for 190 across England and 53 in south Wales, funding vehicles and charging infrastructure.

In Wales, Cardiff City Council receives £5.7million towards 36 BYD/Alexander Dennis vehicles (£341,000 of this is for charging equipment), Stagecoach South Wales £2.84million towards 16 Optare Solo and Metrocity single-deckers in Caerphilly (£900,000 for charging) and Newport Transport £997,659 towards one vehicle (£786,795 of it for charging infrastructure). The Stagecoach buses are due in service next year.

The biggest single grant in England is to Transport for London, which receives £6.96million towards 63 buses (£3.5million of this for infrastructure).

However, the biggest recipient is Greater Manchester, where four grants totalling £14.85million should deliver 70 electric vehicles and associated charging equipment.

The biggest of these is to Stagecoach, which receives £6.93million towards 32 BYD/Alexander Dennis Enviro400EV City double-deckers (£1.52million for charging infrastructure). It bid for £21.5million of ULEBS funding to help buy 105 electric double-deckers (Buses October) in a project that would have electrified four trunk routes and partially converted two others.

The TfGM vehicles are for the Manchester city centre Free Bus service and the Vantagebranded Leigh-Ellenbrook-Manchester guided bus route, both of which are currently operated by First, which has 25 Vantagebranded Volvo B5LH hybrid double-deckers at its Bolton depot.

Three successful West Midlands bids should put 17 buses into three locations across the conurbation. Coventry City Council receives £2.25million for 10 vehicles (£698,625 for charging infrastructure), Birmingham Airport receives £1.37million for six buses (£664,500 for charging) and the City of Wolverhampton receives £143,000 for one vehicle (£15,000 of that for charging).

Fourteen are being funded in Leeds, with First receiving £1.77million for nine (£494,725 of that for charging infrastructure) and West Yorkshire Combined Authority receiving £617,000 for five (£224,000 for infrastructure). The First vehicles will operate service 5 (Leeds-Halton Moor), which incorporates the central area Leeds City Bus, while the WYCA quintet is for the new Stourton park-&-ride service.

Go North East and PTE Nexus receive £1.66million towards nine single-deckers to operate the QuayLink service between Newcastle and Gateshead, with £450,000 of this going towards overnight charging infrastructure at the operator’s Riverside depot in Gateshead. They are due in service early next year. With 100 electric singledeckers in its London fleet, Go-Ahead says that these and the Metrobus fuel-cell vehicles will make it the UK’s largest operator of electric buses.

In the East Midlands, Trent Barton has been awarded £1.88million (£363,859 for infrastructure) for eight buses and Nottinghamshire County Council — which put two new BYD/Alexander Dennis Enviro200EVs on a park-&-ride service last year — has received £908,000 (£300,000 for infrastructure) towards four more electrics. The only vehicle-only grant, of £560,167, has gone to Brighton-based community interest company The Big Lemon to add a further five electric single-deckers, taking its zero-emission fleet up to 12.

All the grants are subject to the bidders being able to raise the matching investment funding to purchase vehicles and charging infrastructure.

Out of £30million of grants awarded in the first ULEBS funding round announced in 2016, £11.1million was reallocated a year later from schemes that had failed to get off the ground. £1million of that reallocation was awarded to Go South Coast and Wiltshire County Council to buy three Enviro200EVs for Salisbury park-&-ride, with an anticipated introduction of them last summer (Buses November 2017).

A subsequent bid for a grant towards the £120,000 cost of installing the charging infrastructure appears to have failed, despite apparent government willingness to support the economy of Salisbury in the aftermath of the Novichok poisoning incident in the city last March.

£3.3million of the reallocated funds went to City of York Council towards First’s purchase of 27 electric vehicles — 21 double-deck and six single-deck — for the park-&-ride fleet. Orders have yet to be announced for those vehicles.