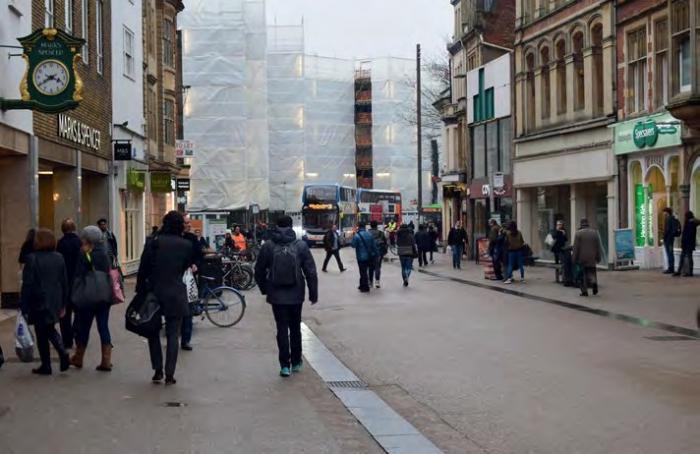 New access restrictions will affect buses in central Oxford later this year when the city’s Westgate shopping centre opens, taking them away from Queen Street and on to a slower 900m longer route that is farther from shops.

North-south cross-city routes were largely severed in 1999 when Cornmarket Street was pedestrianised. Some buses use Queen Street to provide the eastbound leg of east-west routes, including links to the main railway station. In this direction, they have priority access, sharing the street with cycles and pedestrians, though they lost this for much of last year during a temporary closure for building the new shopping centre.

Two consultation exercises saw various groups agitate both for and against retaining bus access, in the light of expected higher pedestrian footfall after Westgate opens. The plans also included a new turn-round facility for buses on an existing car park, but this was abandoned after landowner Nuffield College refused to cooperate.

Oxfordshire County Council had initially indicated it would support the trial retention of bus access alongside the new shopping centre, but this was overturned on safety fears at a council meeting in late December. Managing directors of both the city’s bus companies addressed the meeting to explain the impact that the closure would have, but to no avail.

Stagecoach’s Martin Sutton said that the temporary diversion was unpopular with bus users who are unhappy at having to walk farther, resulting in fewer passengers.

Oxford Bus Company’s Phil Southall later told the Oxford Mail: ‘This decision is not based on evidence. It is going to mean a higher volume of buses in surrounding streets and longer distances for passengers to walk. If people have a bad experience, they will simply not come by bus next time and instead use a car.’

■ Oxford Bus Company has replaced its travel shop within the city’s Debenhams department store with a new facility at Gloucester Green bus station. While farther away from city bus routes, it incorporates a passenger lounge, primarily to serve customers on the company’s expanding coach network serving London and Heathrow, Gatwick and Birmingham airports.