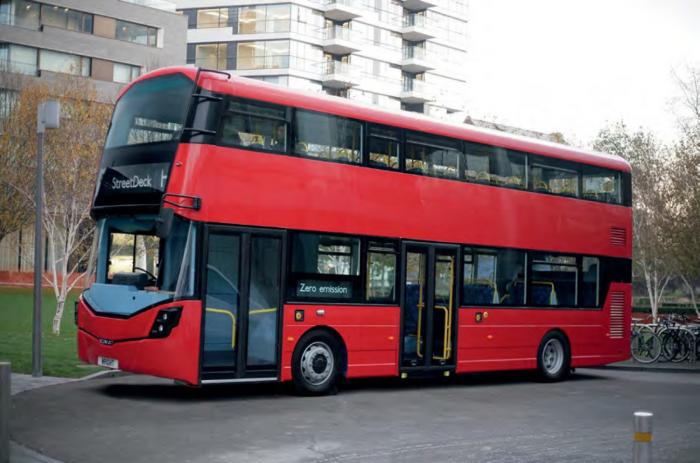 The Wright Street Deck H1 due to enter service in London during 2017. MARK LYONS

At least 550 new electric and hydrogen buses are set to go on England’s roads with the announcement of additional funding in chancellor of the exchequer Philip Hammond’s autumn statement on 23 November, a week before Wrightbus revealed a prototype hydrogen fuel-cell double-decker due to enter public service in London next summer.

£150million — part of a £390million fund for future transport technology — is for buses and taxis. Besides the 550 new vehicles, it also will be used to reduce the emissions of 1,500 existing buses and support a move to make taxis zero-emission.

‘This government is committed to improving air quality and reducing pollution in towns and cities, which is essential for people’s health and the environment,’ says transport secretary Chris Grayling, who has yet to announce how operators and transport authorities will be required to bid for the funding.

Although the Department for Transport will be keen to spread the funding around English cities, it can expect strong bidding from London, where 2,400 new buses are set to be bought by 2020 and 3,500 Euro5 vehicles will require conversion kits over the same period to meet mayor Sadiq Khan’s demand that all vehicles comply will Euro6 emission limits by 2020 and that no pure diesels enter the Transport for London contracted fleets after 2017.

Khan also wants London to be a world leader in hydrogen and electric bus technology and hosted a zero emissions bus summit at City Hall on 30 November and 1 December, where Wright bus displayed its prototype fuel-cell double-decker, the first in the UK if not the world.

The StreetDeck H1 has been developed with a range of partners including electric vehicle propulsion specialist Magtec. The driveline will also be available in single-deckers and Wright bus says it will be ready for production before the end of 2017.

At this stage, it has released little detailed information on the driveline. The secret of its potential success appears to be a combination of a hydrogen fuel-cell and a battery pack to power the vehicle, with the ability for overnight charging if the operator desires.

It also is packaged to look no different from a diesel or diesel hybrid double-decker, with a flat floor throughout the lower deck unimpeded by batteries or the lightweight hydrogen tanks. Both features are tucked away out of sight. It has an electric drive axle, zero emission heating and ventilation, and is supported by an automatic battery management system that continuously monitors and balances the stored power while the vehicle is running.

Wrights Group chief executive Mark Nodder says the production version will sell for an ‘affordable premium’ over existing hybrids, with a defined payback period when the lower fuel costs will compensate for the higher capital cost of purchasing the vehicles, especially where significant numbers — perhaps around 100 — are operating from the same location.

Transport for London believes that hydrogen fuel-cell technology, which is developing quickly, could be more practical to install than battery electric vehicles. Although they are more expensive and this latest application has yet to be proven, it offers the possibility of requiring fewer vehicles and less supporting infrastructure.

Installation of charging infrastructure — particularly the electrical power supply — has slowed the introduction of BYD electric single- and double-deckers into London, prompting concern about how quickly the energy industry could deliver a larger scale electrification of the network.

While hydrogen-fuelled buses — like diesels — can run all day on a single fill taking typically around 6 to 8min, battery charging requires a greater number of pure electric vehicles to maintain the same level of service and more people to shunt them in garages. These extra costs could erode some of the price premium of a hydrogen fuel-cell vehicle. TfL has yet to announce when and where the double-decker will operate, but it is likely to use the existing fuelling facility at Tower Transit’s Lea Interchange garage in east London, suggesting possible operation on route 25 (Oxford Circus-Ilford High Road) on which three Mercedes-Benz Citaro fuel-cell single-deckers were tried in 2004/05.

The global industry is nearly halfway towards a target of being able to produce hydrogen fuel-cell buses for less than €400,000 (£350,000) each.

That is among the conclusions of the final report — released at the zero-emission bus conference in London on 30 November — from the six-year €81.8million (£69million) Clean Hydrogen in European Cities (Chic) programme involving 26 buses in five locations. The largest of these is Tower Transit’s eight-vehicle operation on London route RV1, using Wright Pulsar single-deckers.

It says that the technology has been proven to work, but requires global production volumes of 1,500 vehicles a year — and widespread take-up of fuelcell electric cars — to make such buses commercially competitive.

MPs say ‘no case for compensation’ in franchised regime

There is no case for compensating operators for loss of business in areas of England where transport authorities take advantage of new powers to franchise bus services, says the House of Commons transport committee.

This includes the option of route franchising, along lines similar to London, among measures to be made available to English transport authorities.

‘We accept that the question of whether incumbent operators would suffer a loss from franchising is a complex one,’ say the MPs. ‘However, franchising does not mean operators already providing bus services in the market cannot compete; it simply means that they must compete for the market rather than for passengers as they do at present.

‘We heard from operators who described the move from a deregulated market to a franchising system as “confiscation” or “expropriation” because it meant that they would no longer be free to offer bus services as they choose.

‘For instance, the Wellglade Group told us that the Bill would undermine the substantial goodwill and investment it had built up in its business over many years. We also note that in the Tyne & Wear quality contract scheme process, the quality contract board found that there could be a case for compensation.’

The MPs are unconvinced, concluding: ‘There is no case for compensation for operators in areas where the local transport authority decides to introduce franchising.’

They are convinced, however, of the case for local transport authorities setting up new arms length bus companies in areas that do not currently have them. They accept that there could be a clash of interest between their role as tendering authorities and as operators, and that such moves would attract significant scrutiny by the Competition & Markets Authority.

However, they say they received nearly 2,000 e-mails from members of the public supporting the amendment of the Bill to permit an expansion of municipal bus operation.

‘There are some circumstances, for instance where no private operator is willing and able to operate socially necessary services, where it would be appropriate for a local authority or group of authorities to set up their own operator,’ they say. ‘The current prohibition on all new municipal operators in the Bill is a disproportionate response.’

The committee says transport authorities should be encouraged to assess the benefits of partnerships and franchising before they consider setting up an arms length company, and say that the government should set out the measures it expects authorities to put in place to ensure that their relationship with a wholly owned municipal bus company is kept at arms length. 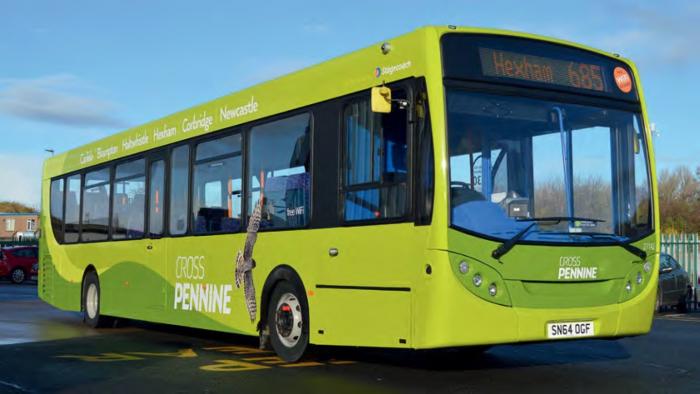 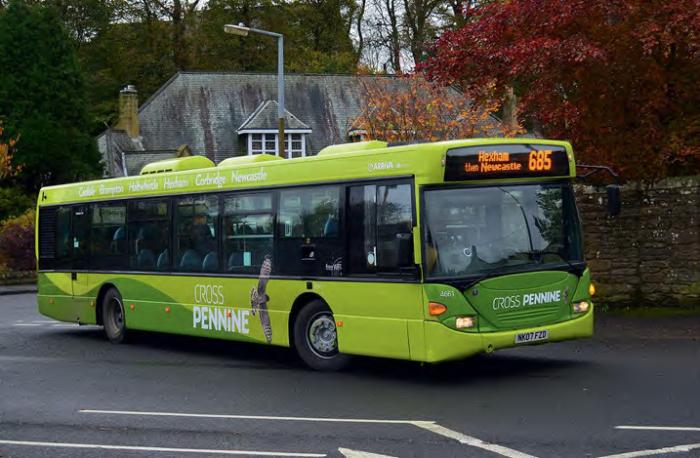 The service — hourly end-to-end and up to every 30min between Carlisle and Brampton — has a revised timetable to improve punctuality, and is re-routed in Melkridge and Carlisle to minimise journey times. Following customers’ requests, there are later journeys from Newcastle on Monday to Saturday evenings.

If you are organising rallies, running days, transport fairs or swapmeets between March 2017 and March 2018, please let us know. We are gathering information for our annual Museum & Rally Guide to be published with April Buses. Please send details to Buses, PO Box 14644, Leven, KY9 1WX or e-mail alan.millar@keypublishing.com to arrive no later than Friday 3 February.