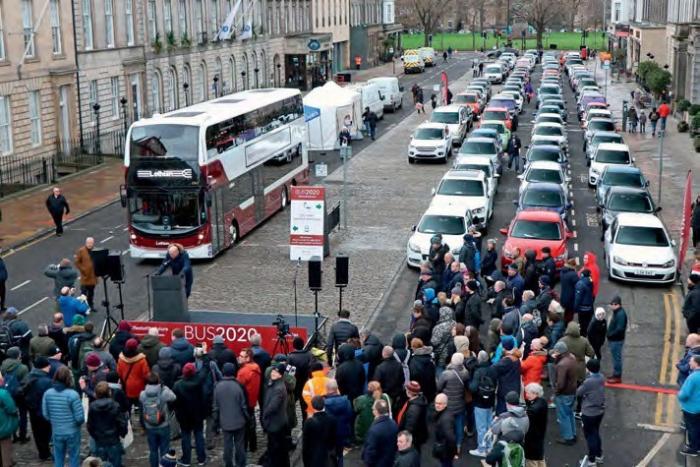 Lothian Buses plans to introduce its initial intake of 42 tri-axle double-deckers into Edinburgh in the first week of March, kickstarting the centenary of municipal public transport in the Scottish capital and a Bus2020 campaign to persuade public and politicians of the environmental benefits of car commuters switching to high-capacity Euro6 diesel buses.

To emphasise the potential for buses to improve the city’s air quality ahead of the introduction of a low emission zone, Lothian displayed one of the Alexander Dennis Enviro400XLB-bodied three-axle Volvo B8Ls in the city centre on 3 February alongside four lines of parked cars to show how much less road space the doubledecker — with 100 seats and capacity for 29 standees — occupies when compared with single occupant private transport.

Besides providing more seats to handle future growth in passenger numbers — these were rising by 2% a year until halted by severe weather and (now removed) city centre diversions — the new vehicles will also reduce the number of buses operated on peak journeys carrying schoolchildren.

Managing director Richard Hall says this will flatten some of the peak and be better for staff, as fewer drivers will be required to work split shifts. But he insists that there will be no reduction in regular frequencies. ‘That would be a really retrograde step,’ he says.

Lothian also used the event to showcase its support for bus manufacturers, with Hall saying: ‘I feel passionately that the bus operating industry has an absolute responsibility to the bus supply industry. It frustrates me that the operating industry doesn’t recognise this enough.

‘We need suppliers to challenge us on design and evolution of buses. We should be doing the same to them. We need to retain a manufacturing industry in the UK. If we had to buy our buses from China or Egypt, for example, that would change the whole dynamic.’

Hall says Lothian typically requires around 75 to 80 vehicles a year and that the new buses will remove the last TransBus Tridents from a fleet in which all but 21 are Volvos. It will then start to replace 15-year-old Wrightbodied Volvo B7TLs. While it has upgraded Euro5-engined vehicles to Euro6 emission standards, he says the base engine technology of pre-Euro5 products is unsuitable for costeffective upgrading.

While some major operators have taken investment holidays since they met the deadline for complying with Disability Discrimination Act accessibility requirements — depressing UK demand for new buses by 35% — Hall says that does not help manufacturers invest in their future. ‘How can we be demanding as a customer if we can’t give continuity to the manufacturing industry?’

Among the new features it has been able to specify from Alexander Dennis at minimal additional cost is a galvanised seat pedestal, which in a rainy climate protects them from rust caused by being chipped by passengers’ feet.

Volvo and Lothian believe that, despite its third axle and based on operational performance in Hong Kong, the B8L chassis will deliver a significant improvement in fuel consumption, the larger six-cylinder engine being worked less hard than the four-cylinder unit in Lothian’s two-axle B5TLs. Lothian says it has already seen a ‘huge’ improvement over the B7RLE model with the B8RLE singledeckers in its East Coast Buses fleet.

Volvo Bus UK managing director Nick Page is confident of winning more orders from other urban operators for the tri-axle B8L. He says there has been considerable interest in it since it was announced in October, and Stagecoach tested one of the Lothian buses on the Cambridgeshire Busway in January. It is available with Wright and MCV bodies as well as the Enviro400XLB.