Forty years ago, two enterprising coach operators in the West Riding designed and built their own chassis and had them bodied by Plaxton in Scarborough. One of them went on to put its vehicle into small scale production and also designed a bespoke bus for a small municipal with big ideas. 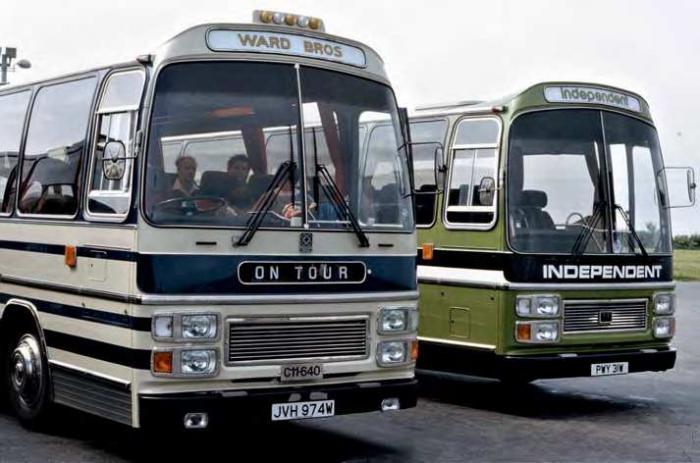 This was a chance encounter rather than a carefully planned and posed portrait of the two unique Yorkshire-built coaches. The time and place were 18 June 1981 at Grantham Services on the A1 in Lincolnshire. The prototype Ward C11-640, JYH 974W, and Independent Coachways’ rear-engined Leyland PWY 31W were both fitted with Plaxton Supreme IV bodies. The Leyland’s windscreen was deeper.
MALCOLM KING

While spending some of the recent lockdown going through his collection of colour slides, Malcolm King was reminded of two hand-built coaches completed within 20miles of each other at premises in West Yorkshire and placed in service 40 years ago in April 1981. One of them led briefly to greater things.

For the avoidance of any doubt, these are true stories and not April Fools. Independent Coachways at Horsforth, Leeds and Ward Bros. at Lepton, Huddersfield built their own chassis which they then sent to the east Yorkshire coast for Plaxton to construct new bodies for them in Scarborough.