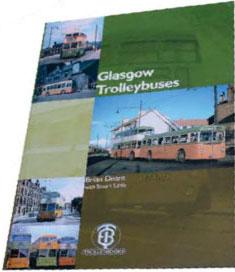 Friends used to joke that the T in Brian T. Deans’s name (actually for Templeton) stood for Trolleybus, as few knew as much as he did about them in general and especially those of his adopted home city of Glasgow, which in April 1949 were the last to be introduced in the UK and the only ones in Scotland for 35 years.

His extensive research as a teenager established his reputation as the best-informed authority on the Glasgow system, which briefly was the UK’s third largest, behind London and Belfast. His first book about it, with the same title as this one, appeared in September 1966 when he was still 19 and its trolleybuses had only eight more months to run. A supplement and two updated editions followed over the next 11 years.

He kept researching his subject, consulting such sources as the National Archive UK at Kew and the British Library at Boston Spa, and hoped to publish this definitive history in time for last year’s 70th anniversary of the system opening. His death in September 2018 made that impossible, but his friend Stuart Little - they first encountered each other on a trolleybus tour in October 1966 - has completed his life’s work, blending the additional research with material from the earlier books.

The end result, produced to Trolleybooks’ usual high standard of presentation, is illustrated liberally in colour and black and white, with many pictures not published before and several maps drawn expertly by Ashley Bruce. There also is an index, an essential feature of any reference book like this. 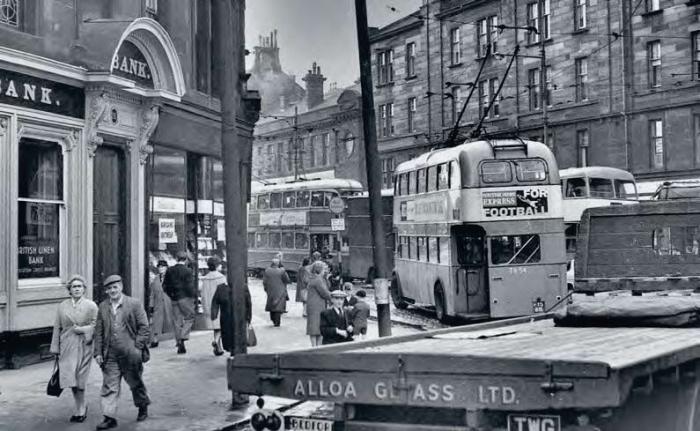 Atmospheric pictures in the book include this early 1960s view of two Crossley-bodied BUTs and a Coronation tram at Bridgeton Cross.
MICK WEBBER COLLECTION

Most of the photographs show overhead wiring as well as vehicles. Some show the backs of trolleybuses, also the built environment of the changing city they served and the fashions of the 1950s and 1960s. There are bank branches on many street corners, small shops, local cinemas, crumbling tenements, working shipyards and docks. Men and women wrapped in overcoats and hats, men with cloth caps and women in headscarves, motor scooter riders without any skull protection.

The colour pictures show their liveries, two of them unique to trolleybuses, and many betray the neglect they suffered through diminished maintenance.

This system lasted for only 18 years and 56 days. The operational fleet peaked on New Year’s Day 1959 at 194 vehicles (there would have been 195 had a six-wheel Daimler not caught fire in dense fog a month earlier) for a peak requirement of 170. The network reached its maximum of 43.34miles in December 1958 on eight separately numbered routes that were more like four with lots of common sections. They avoided the main shopping streets and many Glaswegians were oblivious to their existence. Glasgow loved its trams, but not its trolleys.

The hero of their story is Victor Warren, a city councillor who was first elected in his late 20s and campaigned for trolleybuses from the 1930s when the huge tramway service was still being modernised and extended.

He was a member of the Progressive group, a coalition opposed to the Labour Party. Trolleybuses were in favour when the Progressives were charge, but had few friends when Labour held power, and Warren’s premature death in 1953 robbed them of their greatest champion. The final expansions - more than doubling the fleet - were authorised in 1956.

Around a month before the last tram-totrolleybus conversion in 1958, the Lord Provost of the day, Labour’s Myer Galpern, argued that motorbuses were the future, saying that ‘all those overhead wires’ and the ‘silent running of the buses’ were reason enough for no more trolleys. Routes were withdrawn in 1959 and 1962, and the remainder of the system closed in 1966/67.

Their silent running made news headlines in November 1964 when one of them nearly ended the career of the then 19-year-old Dionne Warwick. Watched by shocked fans, the singer stepped into a city centre street as a trolleybus loomed out of the fog and struck her to the ground, badly bruising her legs. That evening’s concert was cancelled.

Hers is not the only American connection, as rather optimistically in May 1956 the Cincinnati Transit Company offered to sell Glasgow up to 40 of its surplus single-deck trolleybuses, or ‘trolley coaches’ as it described them. Had that long shot reached the right hole, they would have added exotic interest to the 21 unusual BUT single-deckers that the city bought between 1950 and 1958.

Its last 10 single-deckers, like 90 contemporary double-deckers, gave little more than eight years’ service before the system closed and one only lasted two years and two months. When justifying an order for Weymann bodies on 15 Sunbeams in 1952, general manager Eric Fitzpayne told the transport committee that it needed MCW’s properly constructed bodywork to deliver a 20-year corrosion-free life on heavily loaded routes and for vehicles parked at the open air Hampden garage. They were kept barely more than half that time.

Besides 10 chapters detailing the rise and fall of the system and an eleventh illustrating each route, a further 11 appendices cover such detail as the fleet, liveries, destination displays, route history, driver training, garages, power supply and a continual problem of dewirements.

A bonus appendix, by noted transport historian Alan Brotchie, describes Scotland’s only other trolleybus service, Dundee’s two-vehicle service of just over 1mile that ran from in 1912-14, as well as projects mooted for other parts of the country but never progressed.