The deal took more than a year to complete after Netherlands state railway NS first opted to dispose of Qbuzz in the wake of tender fraud in the southern province of Limburg (Global News, June 2015). The sale includes NS activities under the Abellio brand, which are now focused on Britain and Germany.

Back then Qbuzz was run by Abellio and it won the key Limburg concession after gaining inside information from a former employee of incumbent Veolia Limburg.

As a result, both Qbuzz and French-owned Veolia were banned from re-tendering for the contract worth €2billion (£1.48billion at the time). The work was later awarded to German Deutsche Bahn-owned Arriva. The chief executive officers of both NS and Abellio resigned over the scandal.

‘The purchase of Qbuzz fits with the FS Group’s process of internationalisation,’ says the Italian group. Bartho Boer of NS says Busitalia submitted the best offer for Qbuzz and spoke of a good deal for NS, which intends to concentrate on its core rail business.

Dutch newspaper De Telegraf reported in May that NS rail was asking €40million (£35.8million) for Qbuzz but this was not confirmed then. Qbuzz had an annual turnover of around €213million (£190.6million) in 2016 but lost a major contract to Arriva in Friesland with work for 67 buses last December.

Qbuzz manages public transport in the metropolitan area of Utrecht and in Groningen-Drenthe province, including trams. Its 681 buses and 27 trams carried 247,000 passengers a day last year. It has 1,850 employees.

Busitalia has guaranteed jobs and the Qbuzz identity. It is a much larger operation, with 4,000 staff, 2,300 buses, 46 trains, 18 trams and seven ferry services in central and northern Italy. It recently launched a long-distance coach company in competition with Berlinbased Flixbus, the European market leader (Global News, June). 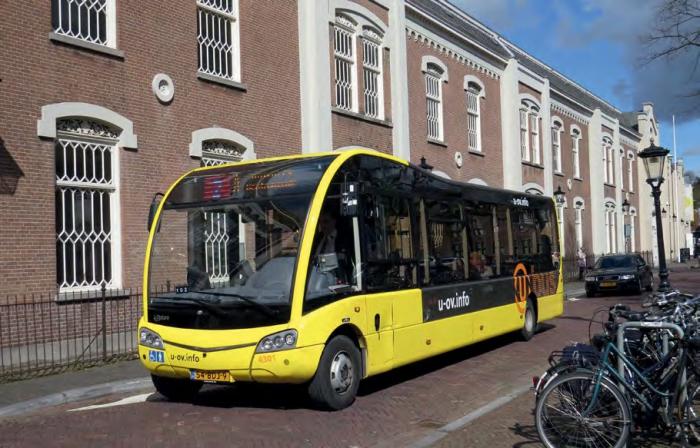 A battery-powered Optare Solo EV of Qbuzz in service in Utrecht.
ALLAN MACFARLANE