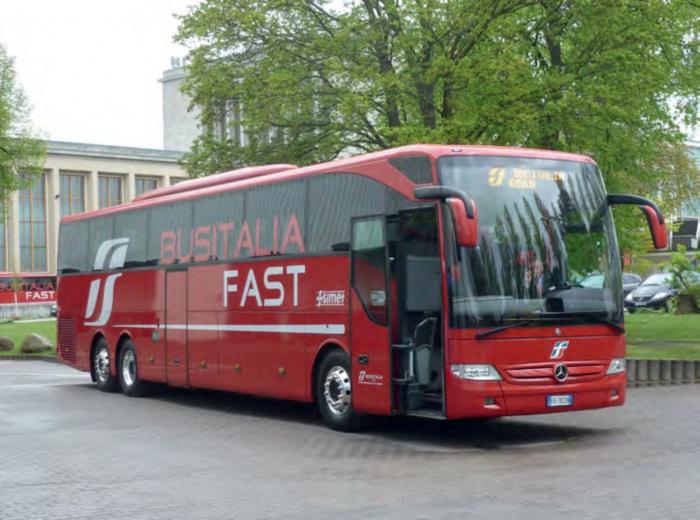 Symbolically, it revealed its plans on 25/26 April at the new Bus2Bus exhibition and conference in Berlin, home city of fast growing pan-European operator Flixbus, which in four years has captured 92% of the newly deregulated German coach travel market and operates in 20 other countries including Italy.

Launching its challenge, Busitalia says it aims to offer ‘a high-quality, innovative and safe service that is both recognisable and superior to that provided by other operators’.

Using a fleet of 60 red-liveried Mercedes- Benz Tourismo, Setra and Van Hool coaches, it will offer daily services from 15 Italian regions and more than 90 cities in Italy and southern Germany. These will dovetail with FS railway schedules and boost mobility in areas where rail links are scarce. The average age of the fleet is three years and each coach will carry two drivers. It also plans to expand into France and Spain.

‘With Busitalia Fast, we are aiming to become the main player in European long-distance road passenger services,’ says Stefano Rossi of Busitalia-Sita Nord. The new firm was set up after FS’s bus arm bought a 51% stake in long-established transport firm Simet, which has been operating interurban express services since 1946.

In Germany, the latest victim of cut-price ticket wars in the long-haul market is the 70-year-old Deutsche Touring company, which is part of the Eurolines network. It filed for bankruptcy in April amid a restructuring programme, although most services are continuing.

Based in Eschborn near Frankfurt, Touring operates 60 routes in 34 countries. Its subsidiaries outside Germany are not affected.