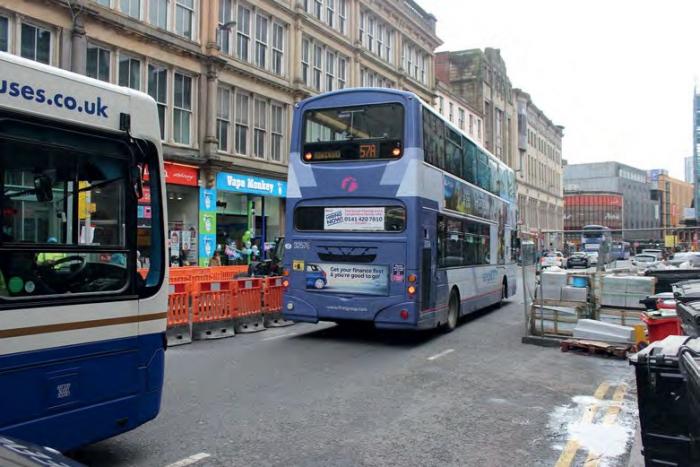 The high proportion of Euro3 vehicles in the First Glasgow fleet includes 32576 (SF54 OTV), a 14-yearold Volvo B7TL with Wright Eclipse Gemini body, in Union Street, part of the city centre where Euro6 standards are to be made compulsory. The disc with a ‘3’ next to the rear fleetnumber declares its emission standard. 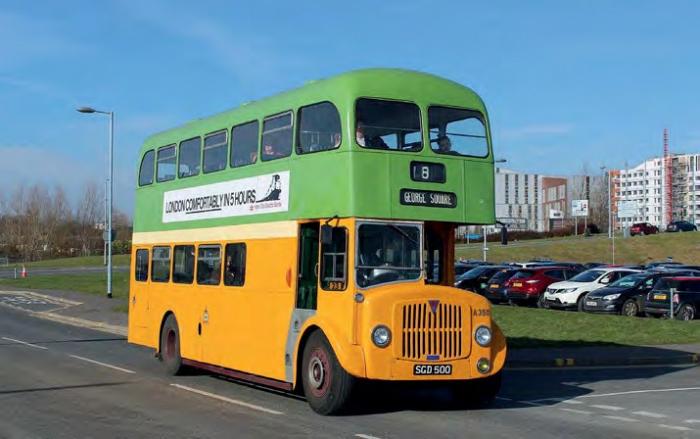 Glasgow City Council has no plans to reintroduce municipal buses, an era that was recalled on 24 February when preserved Glasgow Corporation A350 (SGD 500), a 1961 Alexanderbodied AEC Regent V, operated a shuttle service for visitors attending the Model Rail Scotland exhibition. MURDOCH CURRIE

Securing a better bus service and halting a steep decline in ridership are key ambitions of the administration running Glasgow City Council since last May. The Scottish National Party ended 37 years of Labour control in the city, and council leader Susan Aitken — a daily bus user who has no car — is pushing for rapid changes in the quality and coverage of services in the city where First is the dominant operator and ridership has fallen by 40% over the past 10 years. ‘We want to achieve change within this [four-year] council term,’ she says. The council, which styles itself as the ‘city government’, has set up a Glasgow Connectivity Commission chaired by former UK government transport adviser (and before that a Labour transport convenor in Edinburgh) Prof David Begg to provide an evidence-based framework for a transport system that is not car dependent.