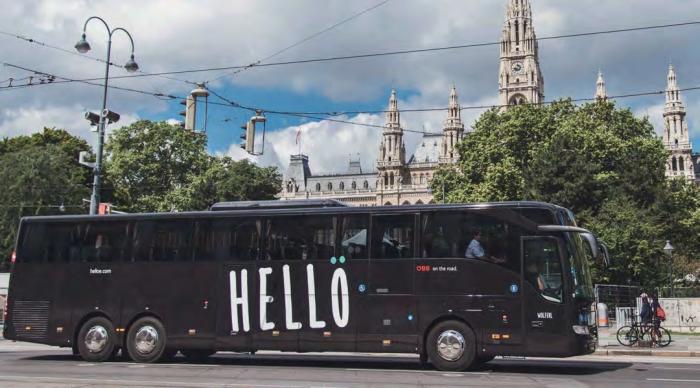 Hellö is saying goodbye after reportedly running up huge operational losses and less than a year after entering the ferociously competitive European intercity market.

Ridership was poor from the outset, with Hellö coaches carrying an average of only 20 passengers per journey, the Austrian newspaper Der Standard reports in its online edition.

It says ÖBB treats the exact losses as a ‘state secret’ but quotes industry experts who believe Hellö has lost between €5.7million and €8million (£5million and £7million).

ÖBB director Valerie Hackl says the longdistance coach market has changed a lot since it launched Hellö in July 2016 after being founded as the ÖBB-Fernbus the previous October. She blames low fares and market consolidation for the failure of Hellö and says customers would now profit from Flixbus’s 22-country European network.

‘Despite the successful beginning and positive customer feedback, we believe that in the foreseeable future and in the current marketplace the ticket prices being sought by ÖBB cannot be achieved,’ she says.

The Hellö website is still accepting bookings and these will remain valid until operations cease officially on 31 July, when Flixbus will incorporate Hellö routes into its network. The 10 cross-border Hellö routes from Austria to destinations in Germany and Italy will be operated by vehicles from Flixbus’s Austrian partner Blauguss. The Vienna-Berlin link is currently the most popular.

Hellö’s leased fleet of 28 black-liveried Mercedes-Benz Tourismos — with aircraftstyle passenger information screens — will be given up but drivers will be offered jobs within ÖBB, which operates a large postal bus network in Austria.

‘Customers in Austria can soon expect a much broader range of express services,’ says Flixbus co-managing director Jochen Engert. ‘Instead of running parallel services, we will integrate the Hellö network to create more travel opportunities.’ Flixbus expects to carry 40million passengers in 2017 and has ruled out ticket price hikes for this year.

Hellö had built up a market share of 0.7% in Germany compared to Flixbus, which has around 92% in terms of operational kilometres.

Hellö offered an upmarket service, with reserved seats at no extra cost and on-board use of a so-called Snäckömat for food and drinks.