More than 50 years after they were built, nearly half of the motorway speed Routemasters built for British European Airways survive in some form at home or abroad, several of them still mobile 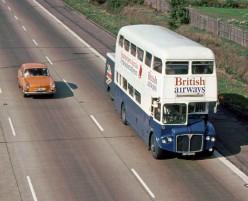 British Airways 30 (NMW 630E), Locomotors trailer in tow, on the M4 near Hayes in October 1976. This became London Transport driver trainer RMA47, its staircase removed to make way for an instructor’s seat, but is now in the course of long-term restoration. TONY WILSON

Of all the classes of Routemaster that AEC and Park Royal produced for London, the highest surviving proportion are examples of the forwardentrance buses built for the British European Airways connecting Heathrow Airport and the West London Air Terminal.