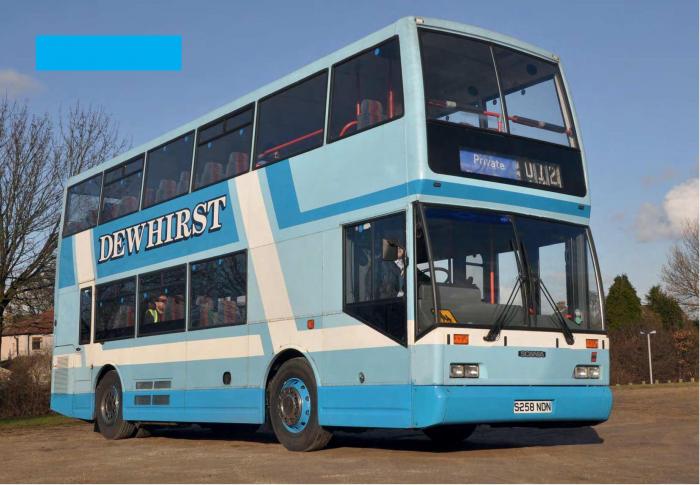 S258 NDN, the East Lancs Cityzen-bodied Scania N113DRB new to Dewhirst in February 1999. It moved on to Al’s Coaches in Birkenhead after around 20 years.

The coach industry has shrunk noticeably over the past year, with several well-known operators ceasing to trade.

One of the smaller but nonetheless highprofile business to close was Dewhirst Coaches in Bradford, which ceased trading on 31 July last year following the owners’ decision to retire. Thus ended a story that began towards the end of World War 2.

Arthur Dewhirst established Dewhirst Coal & Transport on 21 November 1944 as a haulage contractor and coal merchant. Sydney Dewhirst, who remained a director to the end, took over the business later, which latterly was run by his sons Michael (63) and Philip (60).

The move into passenger transport came in the 1960s when Dewhirst’s bought some static caravans at the Primrose Valley Holiday Park in Filey and purchased small coaches to transport its clients there and back to West Yorkshire, starting with a 20-seat Plaxton-bodied Bedford J2SZ10 in 1965. Three 29-seat Duple-bodied Bedford VAS5s followed in 1968, 1971 and 1974.