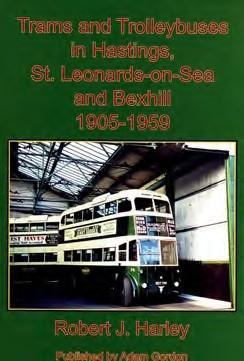 Price: £40 (plus 10% postage from publisher at Kintradwell

The Hastings trolleybus system was one of the handful — six actually — in Britain provided by a company rather than a corporation. However, as Robert Harley relates in this detailed account of electric traction on the streets of this and neighbouring East Sussex towns, its operation beyond municipal control was not for the lack of trying on the part of the councils in Hastings in particular, and also Bexhill.