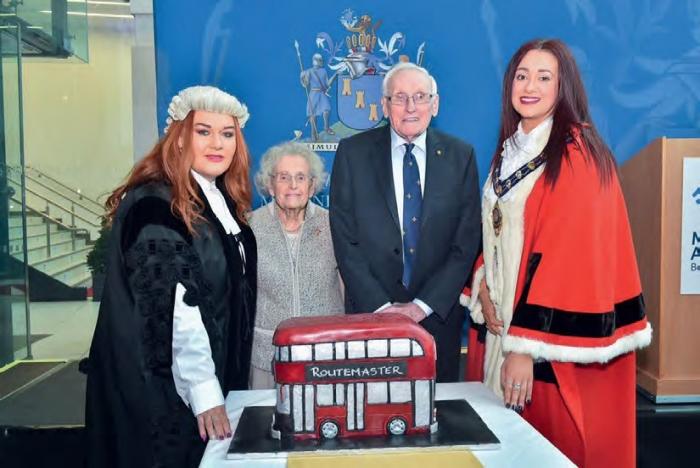 Sir William and Lady Wright with a celebratory New Routemaster cake. Mayor Lindsay Millar is on the right, council chief executive Anne Donaghy on the right. 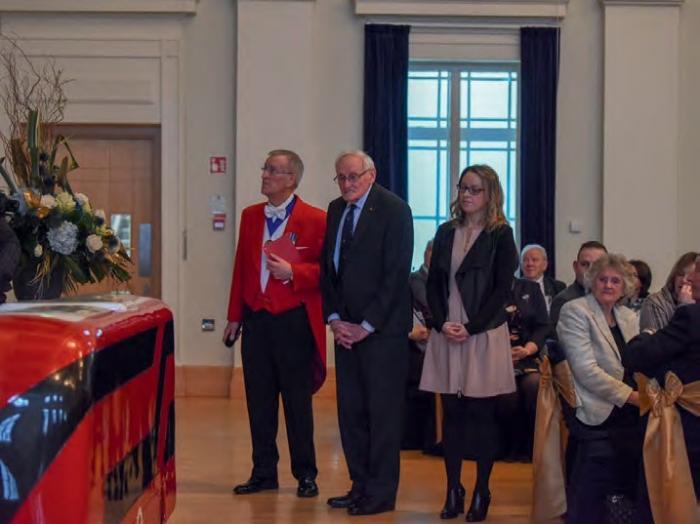 Sir William Wright and granddaughter Lauren Christie with the New Routemaster sculpture presented to the council.

Wrightbus co-founder Sir William Wright has received the freedom of the Borough of Mid and East Antrim, the local authority that includes the town of Ballymena where the UK’s second largest bus builder has been based for all of its 73 years.

Together with his father Robert, Sir William (91) formed the business in 1946 and has played a leading role in driving it forward, breaking into the mainstream UK bus market in the late 1980s and maintaining a particular interest in its development of low- and zero-emission vehicles.

‘To receive the freedom of the borough is a great honour, particularly as it is bestowed from my birthplace, the area where my business is based, and a place I am proud to call home,’ said Sir William. ‘Over my lifetime I have had the privilege to take part in some memorable occasions and this event sits alongside the best of them.’

The borough mayor, Cllr Lindsay Millar, said: ‘Sir William’s contribution to global business and the local economy is exceptional. An entrepreneur and pioneer in his field, despite his worldwide success he has never forgotten his strong ties to Ballymena. His vision and dedication has put our borough firmly on the map as an area of manufacturing excellence and innovation.’ Describing him as ‘a character, entrepreneur, businessman, educator and family man’, North Antrim MP Ian Paisley commented: ‘Workshop people say he is still bursting with ideas that are genius and one day will be commonplace automotive solutions worldwide.’

He added: ‘There are certain rights, opportunities and privileges of being a freeman of the borough. They may drive their sheep around the main street. No one should object if he drives a hybrid bus around the town. That should be a signal to Translink to buy more of your fleet from Wrightbus.’

The borough presented Sir William and Lady Wright with an engraved bench for their garden. They, in turn, presented the borough with one of the New Routemaster sculptures produced as part of Transport for London’s Year of the Bus in 2014.