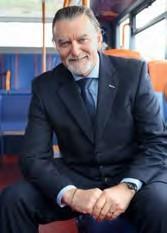 Stagecoach East managing director Andy Campbell will retire in early December after an industry career stretching over nearly 50 years, 14 of them in his present position.

He joined Leeds City Transport in August 1969 as an apprentice mechanic, progressing as that undertaking passed to West Yorkshire PTE, Yorkshire Rider and finally to FirstGroup, as managing director at Bradford.

Ian Chadwick has joined Transdev Blazefield as fleet engineer, responsible for 200-plus vehicles at seven sites in Yorkshire and Lancashire.

He began his career in 1981 as an apprentice fitter with Merseyside PTE in St Helens, progressing to become shift chargehand from 1995.