His ninth and final rides around the national parks* took former Arriva regional managing director BOB HIND into Scotland last summer to explore two wild areas designated as recently as 2002 and 2003, aboard conveyances ranging from double-deckers to a demand responsive eight-seater 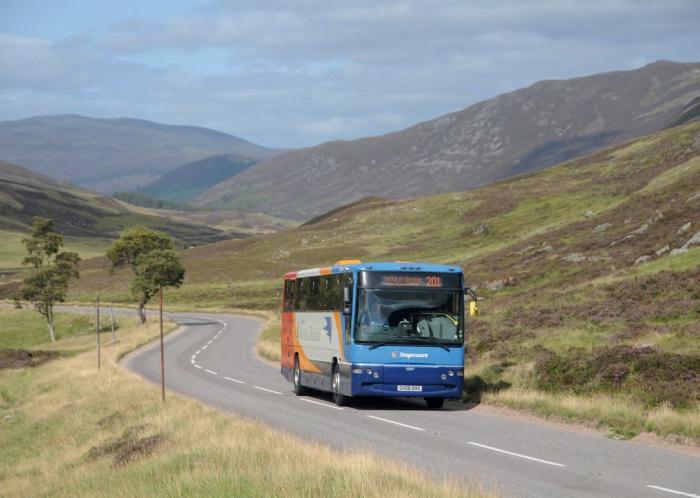 Had he made explored the area in 2013 rather than 2018, Bob Hind could have reached farther into the Cairngorms national park, as Stagecoach Bluebird extended two service 201 return journeys south from Braemar to Blairgowrie between July and September, following the A93 by Glen Clunie and the Cairnwell Pass, which at 2,199ft (670m) is the highest public road in the UK. This view from then shows Royal Deeside-branded 53317 (SV08 DHX), a Volvo B7R with wheelchair accessible Plaxton Profile body, climbing in spectacular scenery towards Spital of Glenshee and Blairgowrie. The Bluebird and East Scotland companies ran seasonal service 501 (Blairgowrie-Braemar-Ballater) in July and August 2016. DANIEL STAZICKER

My tour of the Cairngorms and Loch Lomond & The Trossachs national parks has proved a nightmare to schedule. Last night, my plans for the third day collapsed after a local authority thwarted three prior attempts, so I spent much of my 7hr journey from Liverpool to Aberdeen figuring out how to reach Loch Lomond. Union Square bus station, next to Aberdeen railway station, is bustling in the June sunshine as I prepare for a 118mile round trip to Braemar, the farthest any bus goes into the Cairngorms national park and the only way in from the east.