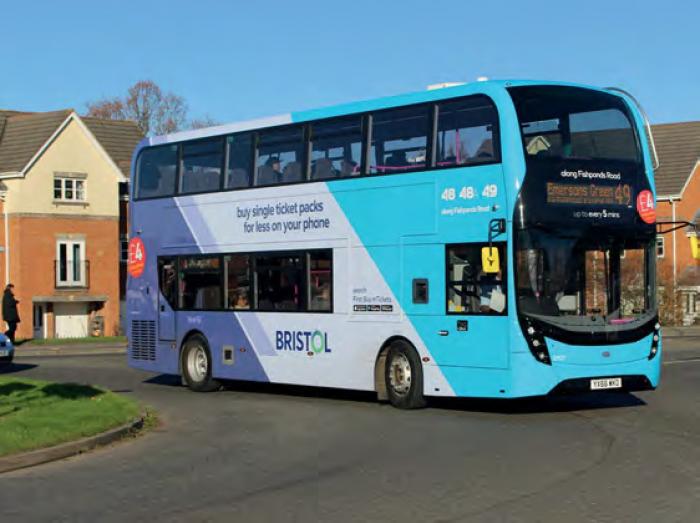 First Manchester is to close its depots in Bury and Dukinfield in part of a new round of action across First Bus to combat the effect of rising fuel costs, reducing passenger numbers, revenue and profit margins.

When it reported its half-year results on 15 November, FirstGroup talked of ‘challenging trading conditions’ that had reduced like-for-like revenue by 1.3% and profit margin to 4.2% before taking account of the fall in the value of the pound, which is raising the cost of fuel.

Group chief executive Tim O’Toole says it will accelerate cost savings by making further changes in its networks, concentrating its efforts on the parts with the most potential to grow. ‘We have to trim farther some of our less promising operations in order to provide better returns. Those changes have already begun with recently announced timetable changes in some of our local markets.’

Quizzed by City analysts, he said: ‘We don’t favour simply taking out mileage and reducing frequency in a big way. That just doesn’t work. The trick is to refocus and re-dedicate the mileage in those corridors where you’ve got the volumes that will sustain it over time, and you have a highfrequency successful network.’

He says recent timetable and network changes in Aberdeen and Glasgow are typical of how it intends to tighten up its operations.

‘Part of the solution is also changing the way we, with our partners, our stakeholders, approach the operation of these urban networks. This is a major focus in Bristol right now.’

‘We’re looking at a whole range of options,’ says finance director Matthew Gregory. ‘It isn’t a one-size-fits-all solution…[but] all options are open to us and we’re going to be pushing hard on those. We’re going to have to tailor all of our approaches to the specific market places. We’re not ruling out anything, frankly.’

Bury depot was built by Greater Manchester Transport, while the Dukinfield facility is base for the separately licensed First Pennine business previously managed by First Potteries, which as management-owned PMT acquired it with the Pennine Blue company.

• The five-month bitter pay dispute between First Hampshire & Dorset and Unite union drivers in Weymouth and Bridport was settled following a meeting in London on 25 November that included senior FirstGroup management. The terms of the agreement will not be made public. The last in a series of strikes was on 16 November. 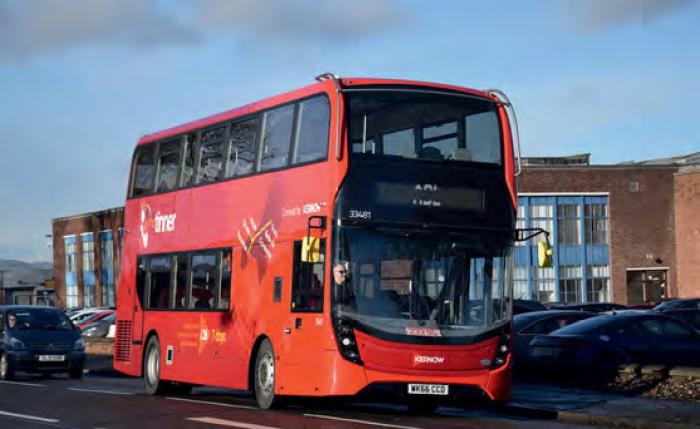 On delivery to First South West in November was Falkirk-built Enviro400 MMC 33481 (WK66 CCD) with new The Tinner livery for the Penzance- Truro corridor. GORDON SCOTT

City of York Council was poised in December to extend fagain First’s contract to operate the city’s park-&-ride — by another 12 months to February 2018.

It had already extended it by six months after failing to secure any compliant bids for the contract it wanted to award (Buses, November). Now it says it has talked to eight prospective bidders for the new contract.

It says views of possible ways forward vary from operator to operator and that some hold ‘diametrically opposed views on certain issues [such as] the council procuring buses, which could then be leased back to the operator’.

Particular areas highlighted include greater freedom to determine vehicle standards (currently, double-deckers are not permitted), more flexibility on pricing and alternative options for maintenance and management of the park-&-ride sites (which the council wishes the successful contractor to take on).

A stumbling point remains the operation of ultra low emission vehicles, which without grant funding towards their purchase would require a hefty increase in fares. A report due to be considered by the council in early December notes that ‘with electric vehicles particularly, operators are concerned that the battery life might not last for eight years and factor in significant risk for battery replacement’.

It was also suggested that each of the six routes could be tendered individually, and that the council could assist a new operator in establishing a site for a depot.

Around one-third of First York’s fleet is used on park-&-ride, these being 15 Mercedes-Benz Citaro bendybuses, 10 Wright-bodied Volvo B7RLEs and 11 battery electric Optare Versas.

Derby City Council looks set to follow Nottingham’s lead and exclude Trent Barton’s Red Arrow coach service from its concessionary fares scheme. It is using a piece of government advice that allows the exclusion of ‘services where the fare charged by the operator has a special amenity element’.

Currently, pass holders travelling from Nottingham have to pay £5, but can return free from Derby. Nottingham’s argument was that other bus routes between the two cities are cheaper, if slower. The Red Arrow — with Plaxton Elite-bodied Volvo B11Rs — takes 35min, whereas the Indigo and i4 bus routes take over an hour, but only charge £3.40 for a single trip.

The council is also looking to exclude the non-stop X38 Derby-Burton route, which crosses the boundary into Staffordshire and is provided jointly by Arriva and Trent Barton, as slower services link the two. The premium charged on the X38 is only 30p more than the £3.70 single fare on the Villager services, but these are 30min slower, at 65min end-to-end.

Derby council expects to announce in January the results of consultation carried out during November. It wants to save £45million from its budgets by 2019, and estimates that these changes, if implemented, could save between £150,000 and £300,000 annually. 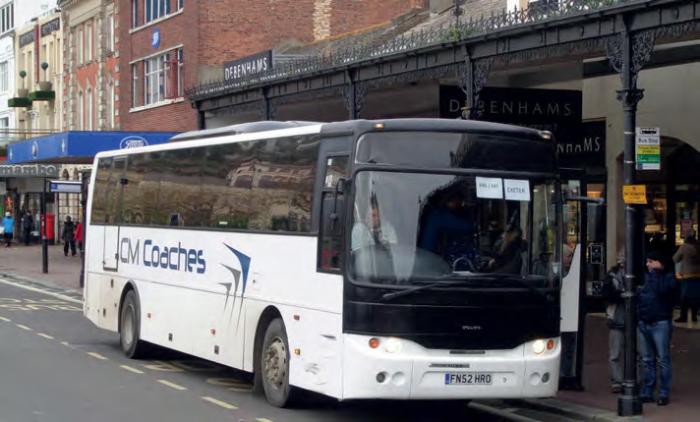 Stagecoach renumbered its route, upgraded to Gold specification in January 2016, to 46 and reduced its 10 journeys – every 75min – to four using a single vehicle. Sunday and recently introduced weekend evening services were also axed, with through services to Paignton cut farther to one peak journey. Stagecoach says its new timetable delivers key commuter and leisure trips.

CM Coaches runs four through services (five during school holidays) plus school X47 variants integrated from an existing service it operated between Exeter and Torquay Grammar School. These fill gaps left by Stagecoach, including an earlier peak bus from Exeter and a later return.

CM’s 09.35 from Torquay and 09.40 from Exeter are the first to accept concessionary passes, as there are no off-peak Stagecoach 46s until 10.00 and 11.15 respectively. Fares match Stagecoach’s £7.30 single and £7.70 return but tickets are not interchangeable.

Stagecoach says: ‘A change in usage patterns, developed during the South Devon Highway construction, has resulted in a significant drop in passengers, necessitating the new timetable to help try and continue to run the service in the longer term.’

• Stagecoach South West will reduce the frequency of its North Devon Wave route 21 (Ilfracombe-Westward Ho!) from 3 January to improve its long-term viability. The core section between Braunton and Bideford will reduce from every 10min to every 15min, the end-to-end frequency dropping from every 20min to half-hourly.

This is part of a package of changes that also redesign the Barnstaple town service network with some new routes, increased frequencies and restored links.

Stagecoach South West has registered most of its hourly South West Falcon linking Plymouth and Bristol as a local bus operation, allowing it to charge short-distance fares and accept free concessionary passes from 3 December.

The 122mile limited stop route along the A38 and M5 has been registered in two parts — Plymouth-Cullompton and Taunton- Bristol — separated by a 19mile unregistered middle section on which it still does not accept concessionary passes. Local fares are available between all locations for the first time since it was launched last February.

Pass holders travelling across the middle section must pay a £5 concessionary anywhere return and do not have passes scanned.

Stagecoach South West managing director Bob Dennison says: ‘I hope the changes we are introducing create more opportunities for customers to use Falcon as a commuter service, especially for journeys between Churchill and Bristol city centre.’ 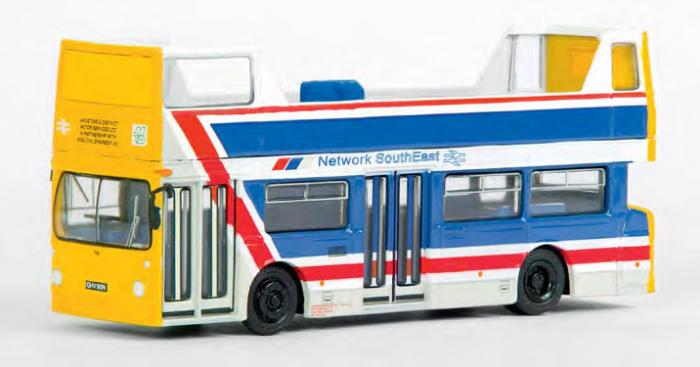