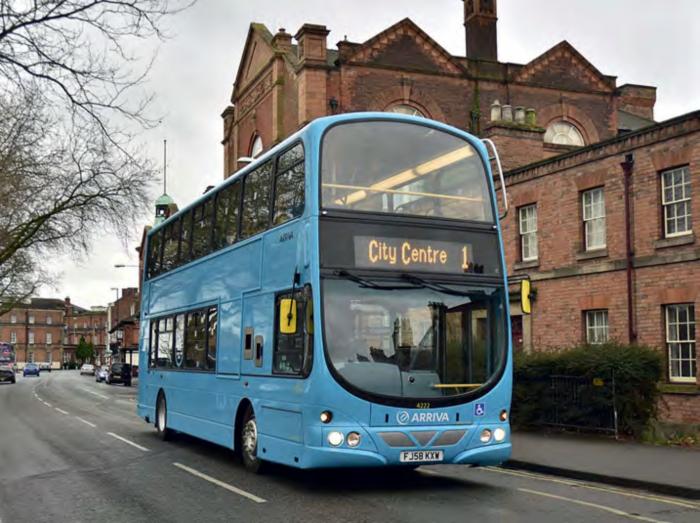 Arriva is updating its 20-year old corporate identity with a brighter base livery and a new version of its fleetname and logo.

The full relaunch is not expected until later this year, but the Sunderland-based group — owned by German state railway Deutsche Bahn — has briefed employees on the plan, which will keep the cost down by phasing it in over a period of months as new vehicles are introduced and existing ones and other plant and equipment need to be repainted.

The aquamarine and Cotswold stone livery, first introduced in 1997 and modified in application since then, will be replaced by what the group describes as brighter colours. A Wright-bodied Volvo double-decker in the Midlands fleet appeared during February in a light shade of blue, but retaining the 1997 logo.

The fleetname is being changed from upper to lowercase characters, with the wheels logo rearranged in the shape of a letter A, but this will not appear on vehicles for some time. Arriva has told staff that the existing logo and colours have become dated, especially when compared with such new players in the transport market as Google and Uber.

An identity update also chimes with other changes being made by Arriva, like its consultation with passengers and nonusers on the design of new buses (Buses last month). At the UK Bus Summit in February, chief executive officer Manfred Rudhart said it needs to understand better the travel patterns that users and non-users make and recognise that some current levels of service are no longer competitive with the car.

He says the industry must acknowledge that service reductions leave some spaces, like rural areas, with no service and thus cut off a large proportion of the population from buses and from their social lives. ‘That forces lower income groups to stay at home or buy a car.’

Rudhart says operators like Arriva need to offer solutions to these communities, including smaller vehicles, on-demand services and community transport initiatives. ‘Some of this will be commercially viable,’ he told the summit, ‘but the majority might never be commercial and will require a partnership with these communities.’