In the first of two articles, MALCOLM COWTAN begins a journey on the T2 from Bangor to Aberystwyth in March 2020, just before the pandemic began in earnest. 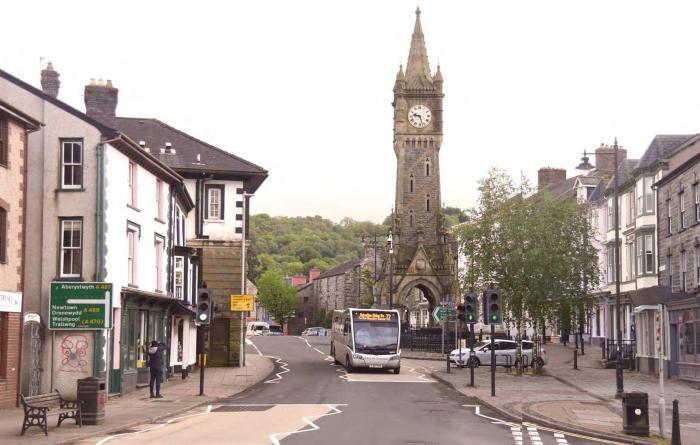 Lloyds Coaches YJ67 FZM, an Optare Solo SR, in Machynlleth on TrawsCymru route T2. The clock tower was built in the 1870s to celebrate the 21st birthday of Viscount Castlereagh, eldest son of the Marquess of Londonderry whose home was in the town.
DANIEL STAZICKER

My plan is to ride on the T2 from Bangor to Aberystwyth, a journey of more than 80 miles that takes three and a half hours.

T2 is part of the Welsh Government supported TrawsCymru network. TrawsCymru means Across Wales, and there are now 14 routes extending the length and breadth of the country. T2 was one of the first, and started in more or less its current form in 2004, when it was numbered X32, operated at that time by Arriva Buses Wales. It replaced a once daily 701 which had run commercially between Bangor and Cardiff since 1979, with a change of bus, or more correctly, coach, at Aberystwyth.